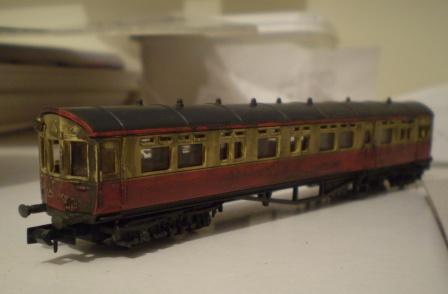 The only modelling I’ve done in the last few days is to weather a couple of Autocoaches for Nigel’s Unnycoombe layout. One in Carmine and Cream livery, and one in Maroon. Where possible I’ll use photos as a general guide and most of the colour shots I have of the mid sixties period show fairly clean sided coaches with dusty underframes and grimy ends. However on this one, once I’d done that, I just kept going, making it absolutely filthy. I fear it may now be over-done, but it’s difficult when looking at something in isolation away from the layout that it will be displayed on. I’m also finding the wash technique that I’ve used for years on larger scale models doesn’t work so well with N gauge. There is an underlying surface-tension in the paint which annoyingly doesn’t scale itself down to suit.
Posted by Chris Ford at 20:27 No comments:

Do you need DCC?

Have we been sold a puppy? I’m suddenly aware of how much RTR models cost and that relative cost compared to a few years ago. If I want to buy a new Bachmann Peak it’s going to cost me up to £74.00 (or £171.00 as the RM review states. In error I hope). My at a glance judgement would suggest that that’s around a 20% increase in under five years.
What have we got extra?
Better motor? Well no. The motors in the newer stuff actually seem lower quality if anything. The transmissions have improved, but as far as Bachmann is concerned that is a simple transfer from their U.S. models. What it appears to me that we’re getting is chips. And what are chips? Cheap. And do we want them?
A decade or so ago I built an American layout. Stocked with Athern, Bachmann and Atlas locos, none of which cost more than forty quid. They ran... faultlessly. No chips. So they’re not there for the running quality. Do they improve the appearance? Err... no. What is happening, by stealth if you like, is that we are being sold a new operating system. Why? Quite simple... there’s more money in it. There was a glass ceiling above which models wouldn’t sell. This way they will.
But the vast majority of us don’t need it. Most of us build reasonably simple one-man operated layouts that can be run prototypically (with a couple of exceptions) with existing wiring techniques. Exceptions might be independently running the original train engine out of a terminus immediately behind the departing stock. And when was the last time you saw that move carried out on a model?
This wholesale rush to DCC worries me slightly. It’s a system that can’t easily be repaired by the user and most of us don’t need it, but there is going to come a time, possibly in about fifteen months where every RTR model will be pre-fitted whether we like it or not.
I’m off, back to the three-rail with my head in the fire-bucket.
Posted by Chris Ford at 11:21 2 comments: