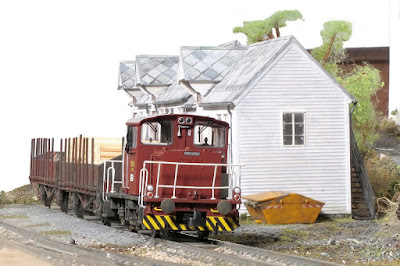 Svanda is at the ERA show in Birmingham this weekend. Drop by and say hello. 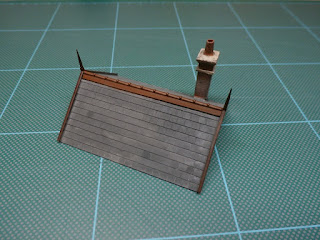 If not at the finish line, I'm definitely in sight of it. The roof section now done complete with a bit of paper flashing around the chimney. The footsteps next.
Posted by Chris Ford at 21:21 No comments:

Off to Scaleforum today, mainly for a bit of shopping and a general nose around. Not my usual haunt or social circle, but there's usually some good trade.
First off, the food (compared to Woking) was top notch, good basic fare and plenty of it, so that's a relief. Just shows that it's not that hard to get it right even in a leisure centre environment.

The show... hmmmm. 10 layouts (Though you had to search a bit) obviously of the P4 variety - that much is expected. The rest however... quiet. Sparse. The first time I went to the new venue, after the Society left its usual Leatherhead home, you couldn't move, couldn't park, and couldn't get near any layouts. Today? Well the picture says it all. I wonder if they are suffering with the UKIP effect of now having shouted for higher standards and got them, they are in a wilderness period. 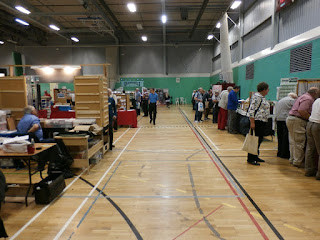 
Quite a while ago now I realised I'd got locked out of my flickr account. I tried all the usual dodge arounds to no avail. So I just left it there. Then a series of research escapades found me lurking on other people's flickr pages and finding it all quite useful. The upshot of which is that a new page has been opened up. Most of the initial uploads are things that were closest to hand, but I'm in a steady process of loading all my Seaford branch shots from the 70s forward. Seems a shame to leave them hanging around in a cupboard when they may be of use. 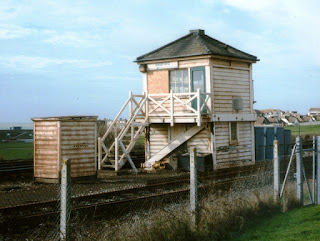 Art of the Compromise on the road 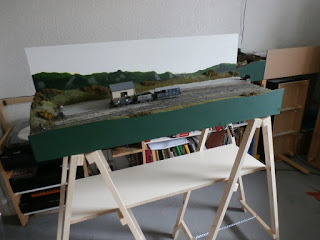 Now that the AotC is semi-booked for  the WRG show in the spring a little work was needed to get it to a point where it could be shown. The basic premise is that it is front operated at home, so there was no provision for rear operation. An earlier trial on the usual trestles proved that they were too high to reach over, and the alternative would be to stand right in front of it- not ideal. As this will probably be its only show I didn't want to do too much, but a set of shorter trestles have been knocked up out of lolly sticks set at a traditional, and to my mind a better height. Wednesday saw the trial to see if that would work. Now I just need to get the stock sorted.
Posted by Chris Ford at 11:52 3 comments: Note for younger readers, at least anyone under 30. This is an engine. Not your weedy, DCC, sound, detailed Bachmann crap, but an ENGINE. I got some of the old Rhiw stock out and this was second in the pile. Still in its box with Triang-Hornby branding. I make that the thick end of 50 years old. Plopped it on the track BRRRRRRRRR......... Flick switch, BRRRRRR....... Who needs sound chips -next door were hammering on the wall thinking I was drilling.
It doesn't say 'made in china' on the bottom, but 'Built (built!!!) in Britain'. This was something that you could thrash round for hours even after your Dad had stepped on it.

There were a couple of spare locos for Rhiw, this being one. But when it came out the grins appeared. It's basically dimensionally correct, but lacking any obvious finesse, and is everything MRJ railed against - however, have we taken a wrong turn? Cos this has presence like no Heljan Hymek ever could.
Posted by Chris Ford at 21:36 3 comments: 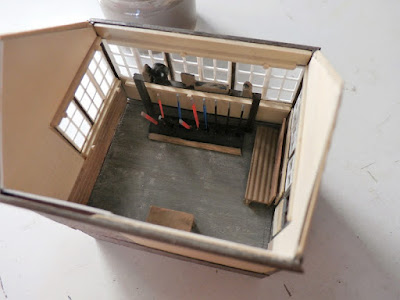 And more or less done. Here with the upper structure dropped on.  Once you start scratching the surface, you open up the worm can. I started asking how many of each colour? AotC has four points so that's the black ones done, and I reckoned two FPLs and at least four signals. That filled the frame with no spares. I re-read Tim Rayner's excellent article in RM from a couple of years back and now I get the feeling that I probably needed about 15 levers as opposed to 10. Too late now, I shall never sleep again. Maybe some clever person could draw up a signalling diagram for the layout.

Because AotC is a 'model' and not really drawn from real practice, it probably needs ground signals on both sidings, which in essence means three FPLs as they exit the running line . There would be a Home beyond the bridge, plus the starter and another ground at the far end. Would the crossover be worked on one lever? Questions... but then it's barely visible anyway.
Posted by Chris Ford at 18:23 No comments: 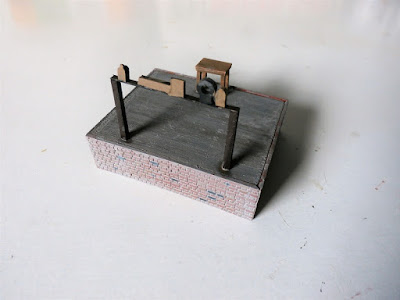 Another stall point, so another sideways jump. The signal box has been hanging around on the bench for weeks, so I fired myself up to do the interior. This is one of those 'why are you bothering' moments. By the time the roof is on and it's all dark and gloomy, and there's a bit of reflection off the glazing, you won't be able to see anything in there. Plus its final position on the AoC will be at the front facing away from the viewer. However... with nothing in there it just looks wrong.
Regulars will know that I'm not one to splash the cash if I don't need to, no 12 quid interior kit for me, so a bit of subterfuge comes into play. What is needed is shapes, not hyper-detail. A table was knocked up out of a bit of 20 thou and some strip and the instrument bridge from lengths of square sprue  and the pips from the same. A sloppy coat of dark browns and all is done. Rough? Absolutely. But behind the glass there is just enough visual information to suggest more. A bench seat has also been done from the original doors on the pagoda. Levers next. 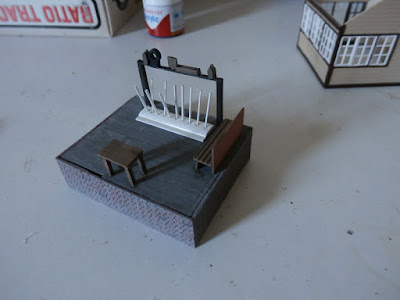 Lever frame done. Piece of 80 thou rounded off, a few holes and some strip. Most of the visual info will be colour - black blue and red with  touch of metallic on the tops. I did include the kick plate even though it'll be invisible. Below the basic inspiration 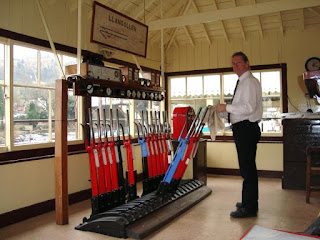 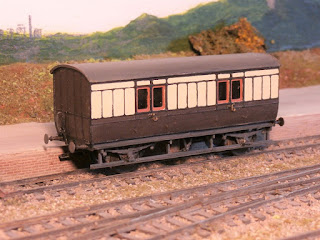 W1 van done, less transfers which I have yet to source. Though would such a lowly piece of kit received a crest? There are many questions about this as there is only limited information and you tend to fall into the trap of looking at other people's models. The footboards for example: the Russell book suggests that they stopped just short of the second to last panel, but no one else has done this, so does this mean that it's wrong? It would mean that the end supports would crash through the springs so...  And don't get me started on the roof lamps. Oil to start yes, but at the end of its life? The post war photo suggests that these weren't replaced with gas, so I've gone with this.
A fiddly but quite fun project, and by using a spare set of plastic sides, much cheaper that the Shirescenes option of brass replacements.
Posted by Chris Ford at 12:18 No comments: 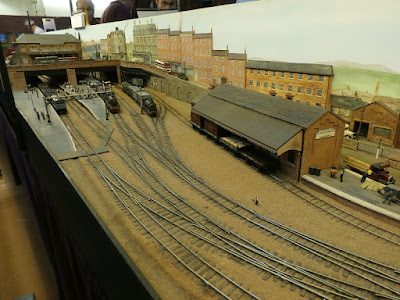 A trip up to the Woking show this morning. Mainly to do a little shopping, but also because it looked rather good. One of the draws for me is Thirdly (above). I think this is a joy as it is pure 60s modelling with brickpaper, SMP track and mainly tweaked proprietary stock. I reminds me of all the black and white shots of layout in my early RMs - mainline running that felt busy and purposeful; something I've still not reached. The rest of the show was excellent. Full marks to the manager for getting two halls full of great layouts.
The catering though.... shite. Council run venue, probably 1,500 plus trainspotters through the door over a weekend and a notice. 'Sorry the sandwiches ran out on Saturday lunchtime'. Err, were you not expecting us? Can you not make sandwiches? There was nothing else save a few ends of cake and nothing looking like lunch. Utterly appalling service and planning. If you go next year, take your own. 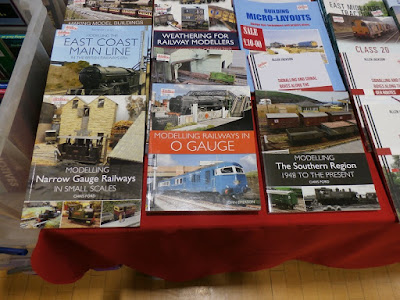 One thing that did make me smile was the first book stall inside the door.  a couple of titles by some bloke called Ford... whoever he may be.
Posted by Chris Ford at 21:07 1 comment: 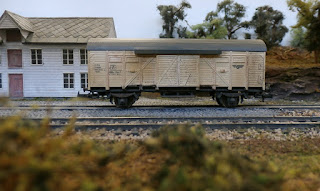 The first of a couple of outings this month for Nigel's Svanda. All behaved fairly well though I started drawing up a list of repairs and improvements. Bouncing it in and out of the car has induced a few knocks, and there are odd bits of ballast missing and edges of scenery that have lifted and need sorting out. A phone discussion this morning about it's future and if any, which shows we would like to do with it in the future. 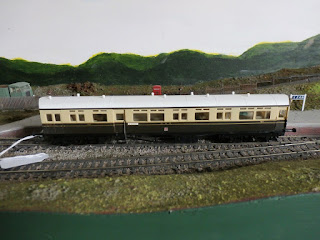 There were two small purchases, both off the club stand - I tend to home in on these more these days as the technology is older and I can't find three figure sums for the new stuff. This Airfix autocoach was on the list for AotC though I'm mentally back dating it a bit from this. Anyway... at nine quid it was two thirds of the price of the Triang clerestories on the dealer's stand (how much?). The previous has added a light via track skates on one bogie which are an easy remove. Now to find the MRJ article (30 something?) which tells me all the things that are wrong with it and how to fix them.
The other purchase was a Merit delivery cart which may be closer to HO than 4mm looking at the figure. Again a princely two quid.
Posted by Chris Ford at 12:14 No comments: 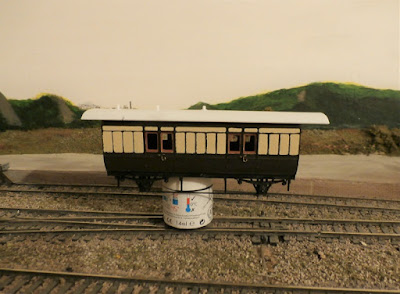 This is proving trickier and taking longer than I thought. The roof shows the amount of cutting of all the parts.
Posted by Chris Ford at 09:22 1 comment: