Going Roco down in... 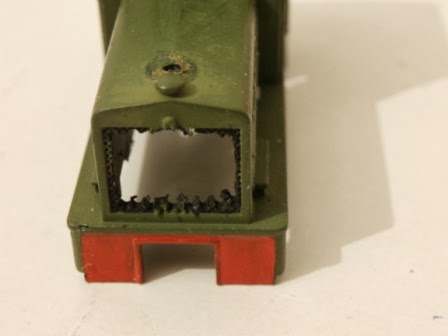 There is a bunch of tidy up projects to go at the back of the book project. This is the first - taking a s/h Roco diesel and Anglicising it as far as is possible. It came with an added chimney, the hole for which needs to be filled and as can be seen the rad had come out to be replaced by some etched N gauge grill mesh... can I find it? Can I bugger. I've moved a packet of it umpteen times, and now when I want it, its vanished. If anyone has a scrap can they please stick it in the post.
Posted by Chris Ford at 09:48 No comments: 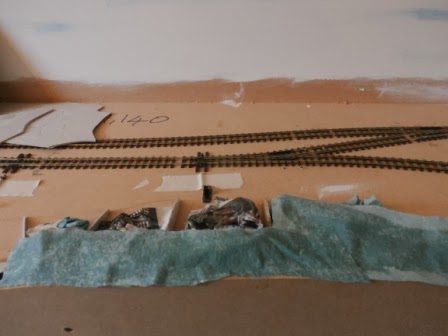 A productive day - and that makes a change. Onto the scenic work on 'Edge' with the usual bog paper over card formers and rubbish. Nigel rolled up, busied himself and destroyed a couple of kitchen cabinets, produced some card building mock-ups from a plastic bag to trial on the paper plan of Morton Stanley and left with burnt lips from eating Wright's Evil Chilli Pickle. The same Wright who supplied the cottage kit on Tal-coed.

I note that according to Mr Parker that I'm now one of the 'cool kidz'.

If all the above makes no sense at all then you really are not concentrating and keeping up -  it's your own time you're wasting...
Oh and the bathroom is now complete.
Posted by Chris Ford at 01:52 2 comments: 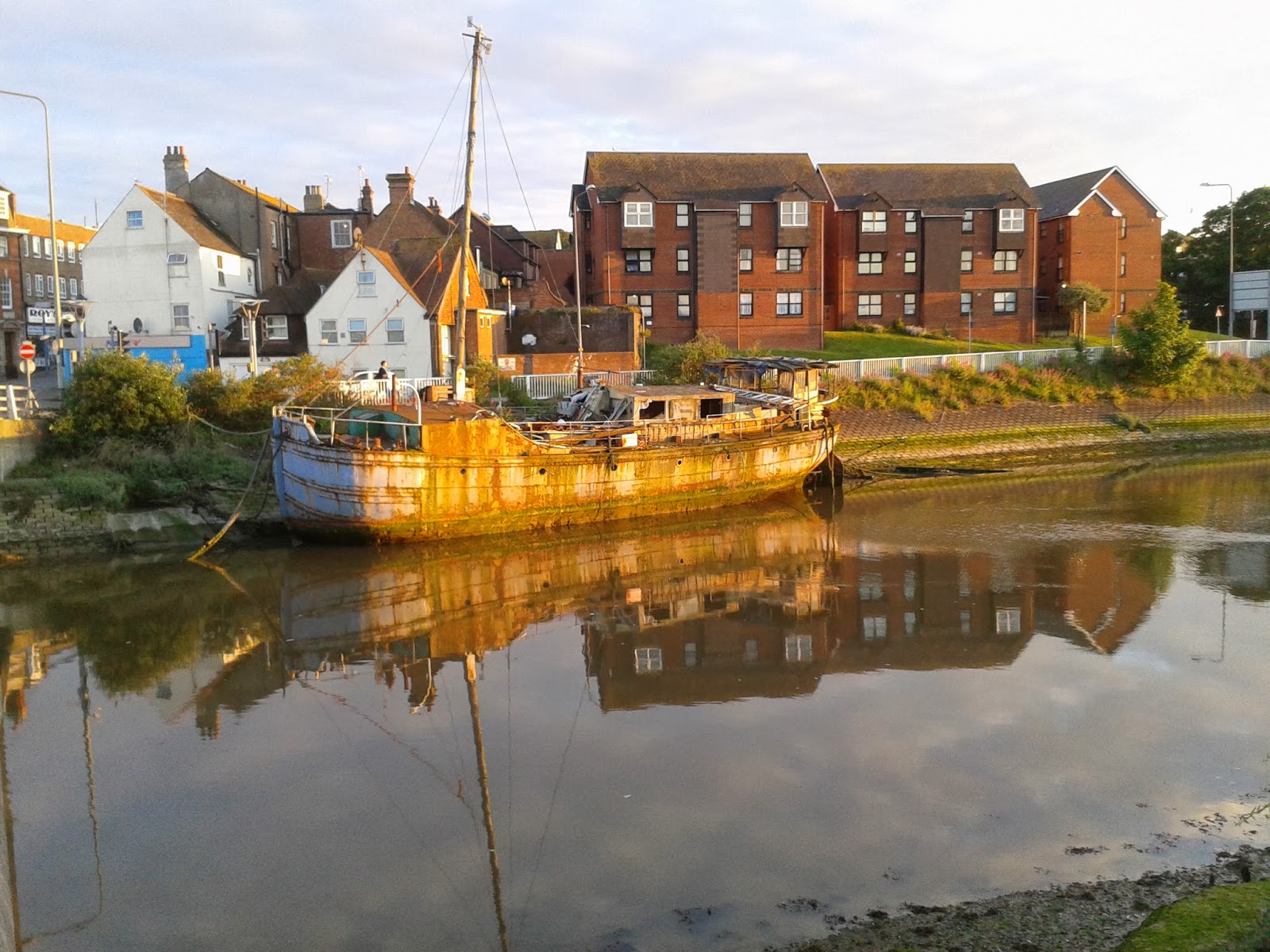 Regulars will know that as a long term Sussex resident I have a bit of a love hate relationship with my local port, Newhaven. Despite everyone out of the area thinking people in the south East are all living in mansions, Newhaven shatters the illusion quite quickly. There is a natural island smack in the middle of the town around which are dotted a couple of boat yards and this. I can't remember a time when it hasn't been there and although I've never seen anyone enter or leave, it looks as though it might have residents.
Incidentally this was taken on Mrs F's phone which tips out 2,500 pixel wide photos that are better than any camera I own.
Posted by Chris Ford at 15:24 3 comments: 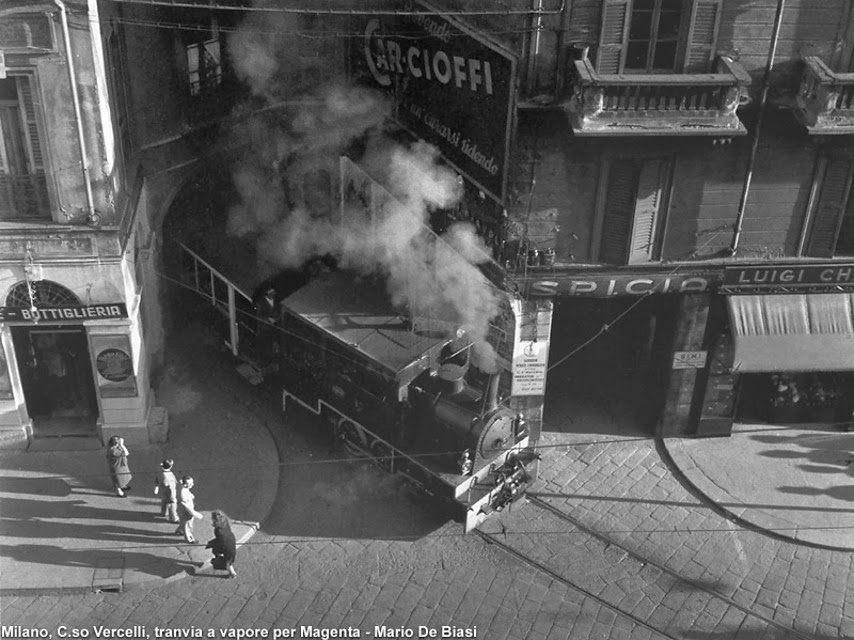 I got this in an email with the script 'I bet you go wow!'
I did.
No other info apart from what's on the credit. Surely wins a prize for one of the most original scenic breaks.
Posted by Chris Ford at 18:01 4 comments:

Not foggy in Eastbourne 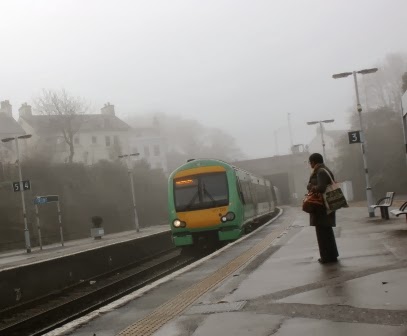 I had to pick up a couple of bits from a shop in Eastbourne. It's nice now that I can just walk to the station and avoid using the car. The weather though was not welcoming - Lewes station swathed in mist. Above: the Ashford bound 171 diesel pulls in from Brighton. Below: a Seaford bound ex-Silverlink 313 unit hovers in platform 5. 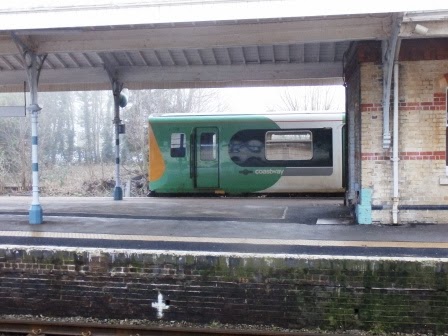 By the time Eastbourne was reached, the mist had cleared. Another one for the signal box nuts (moi?) 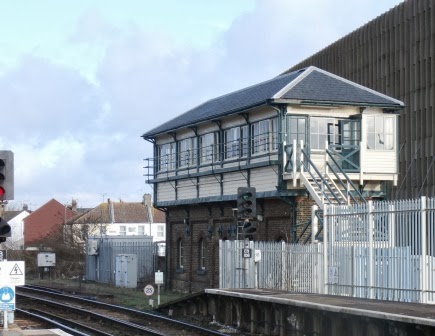 I really should open another page for Sussex railways.
Posted by Chris Ford at 01:26 No comments: 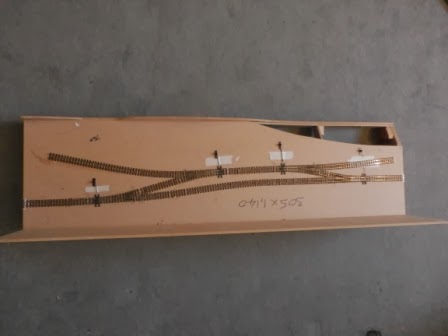 Nothing to do with U2  musos, but the new 'project' layout.
This is becoming, well not a bind, but I do want to get it finished without it dragging. Essentially it's a larger version of Garn at 1' x45" or if you could read the writing ( if Google hadn't insisted on putting the photo upside down) 1,140 x 305mm. Nothing startling so far, the basic stock roster of one coach, one loco, one wagon, one railcar is done plus all the buildings and here a basic Gammon End track layout has been formed on the usual bomb-proof 6mm MDF carpentry.

I was gong to put the point control switches at the rear as in recent builds, but Nigel whispered in my ear about it possibly becoming the start point for a 'round the room' plan. Not sure about that, but if I did, then putting controls at the rear would be a no no. And anyway Garn worked fine at shows with the controls dumped in the front of the board as shown here.
Posted by Chris Ford at 10:01 2 comments: 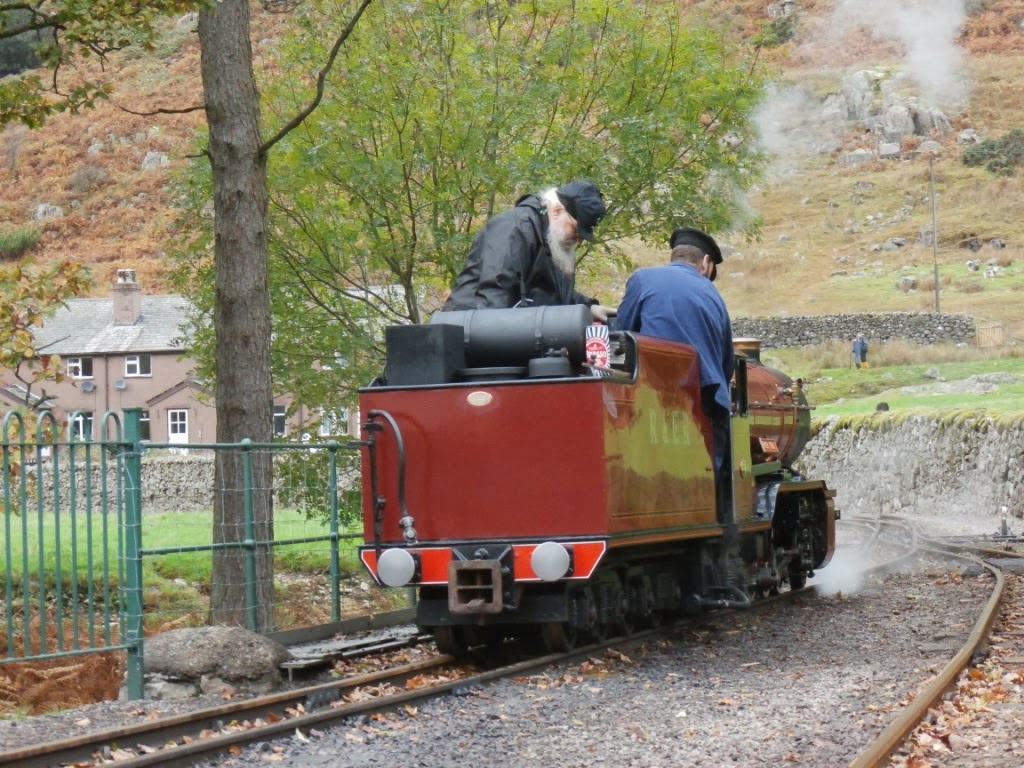 Now all that pain in the arse business of delivering presents is over with, I can give the elves the slip and do something far more worthwhile...
Posted by Chris Ford at 02:20 No comments: 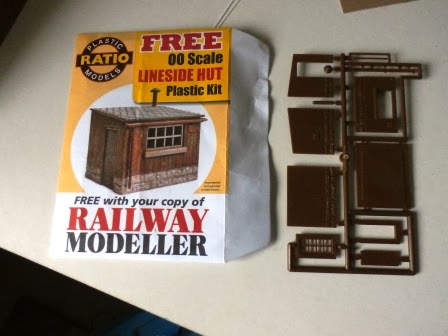 When I posted the picture of the Lincoln hut I'd completely forgotten that PECO were giving away the Ratio hut this month. Then it dropped onto the doormat.
Well it's all very nice and a bit better than another Metcalfe kit, but as Stig points out it is now going to appear everywhere... or will it? Despite the previous give-aways, I've seen none of the station shelters that were the last bit of free in RM despite as I proved here quite a good piece of design which goes together very well. this of course is an existing kit and features in Ratio's ad in the same issue.

The trick is, how to make it that little bit different.
Posted by Chris Ford at 01:42 1 comment: 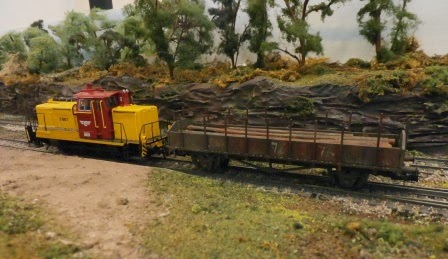 Young Mr. Hill and I spent the weekend at the afore mentioned show. The company of Messers: Knights, Willett, Dodsworth, & Rogers made the whole thing entertaining, but on the whole a bit damp. Stats are: catering 2 (though it did improve)
tea 9.5
access 8
rucksacks 5
Audience was very general and considering that Svanda is at the least a bit of a niche interest that was quite a bit of chat and questioning and one invite.
Next up, a last minute shoe horn invite to Eurotrack in a few weeks.
Posted by Chris Ford at 01:13 No comments: 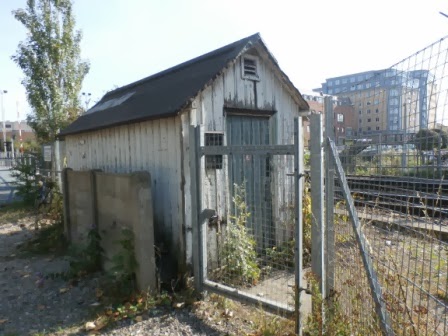 The humble lineside hut. Built in their thousands and most swept away without a second thought. Not as pretty as a station, or as drool-worthy and representative of a company as a signal box, but nevertheless part of the historical infrastructure.

Why then, more than any model building do we not scratch build these simple structures? Instead dumping the same Wills and Ratio homogeneous lumps onto the layouts when there are gorgeous little things like this to make?
Posted by Chris Ford at 01:43 3 comments: 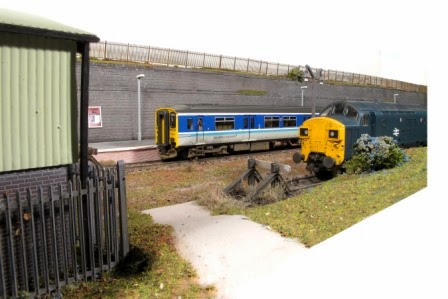 Rhiw returned from Crawley today where it's been store during the moving process. Now though decisions have to be made, and seeing as it's just been bumped from the only showing it had left, it has to go. Either to be sold or stripped and recycled.
So, if you are interested (and the price will be nominal) email me through the profile link bottom right for more details, but be quick. There is a seven day limit, by Monday demolition work will begin.
http://unnycoombelala.blogspot.co.uk/p/rhiw-llynfordd.html
Posted by Chris Ford at 20:17 No comments: 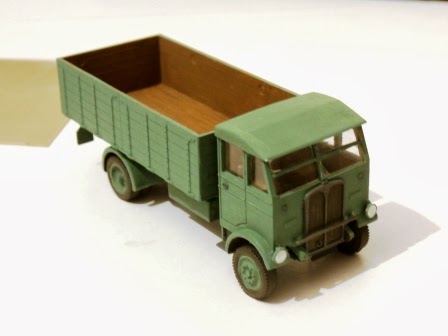 What was supposed to be a quick Christmas throw away has taken a week of fiddling and even now with the camera's cruel eye I notice that the lamps are a bit pissed. Interesting little kit to build, most of the time has been taken up with the research which has been indicated earlier. What has been acquired is that AEC appeared to change the design with the season and while this may not at first glance look like a standard design, it's doubtful whether there was ever a standard design. I would though be interesting to see what Mr Coopercraft used as the prototype. There must have been one. What I've done then is cut off the body rails and diddle with the cab front a bit to make it look like the B/W photo on the earlier post.
Where's it going to end up? Who knows. 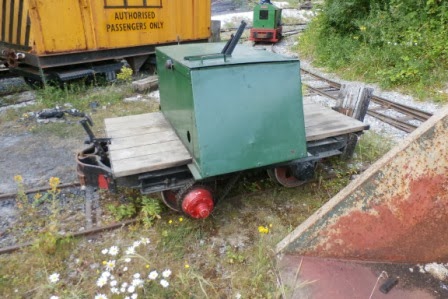 If the Lister-Blackstone would prove a modelling problem, then how about this? Tucked away in a corner at Amberley in July.
Posted by Chris Ford at 01:53 1 comment: 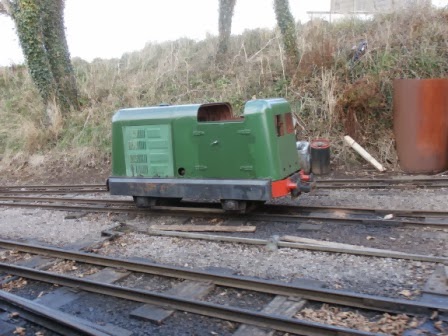 I can't remember in previous years being quite glad that panto finishes today. No more Daisy the cow and magic axes and the giant's trousers falling off. It's been a long run this year and I'll be glad to get back to the usual routines. This may say more about age than anything else. There is a lot a to do: I'm half way through painting the AEC and I have an 009 layout to put together and write up.

The above is a small quiz. The first right answer in the comment box gets a free seat in the stalls for Sunday's show. Identify what and where.
Posted by Chris Ford at 11:29 6 comments: 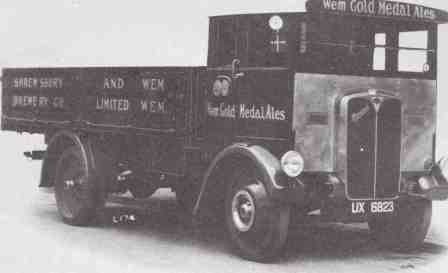 First I need to say Happy New Year to all the lost souls who wander in here on a daily basis. If you wander over to Phil's blog - and if you don't why not? - he has done a sort of blog round robin of his year. I won't go into the detail as he's has done, but it was a waste of a few minutes to actually look at what's happened here in the last twelve months. The rough numbers are about 3,800 'pageviews' a month, whatever that means, so about 40-45,000 a year I suppose, and for what.... ?

I started the year with not only the tail end of the Svanda build, which is now on the circuit, but the start of the 7mm buildings for the new narrow gauge project, finishing the 7mm Stroudley coach and about half of the Branchlines Hawk chassis. Then it all went tits up on two levels. House sale and small book deal. The former disturbed everything, but has changed my whole life, the later has forced me to drop almost everything else to build another 009 layout which will more than likely be sold as soon as it is born. I was actually quite surprised at not only what needed to be finished, but the varied amount of work done.

The present is more info sent by Nigel this morning. The above photo is a 1930 (slightly prior to the Coopercraft kit) AEC Monarch. Points to note: flat cab front, square windows, lights on mudguards, and racing bike wheels. So if you stir the previous post photo with the proud driver and this one together, the kit shape is what you get. Is the roof flat or slightly domed?
Posted by Chris Ford at 13:06 2 comments: