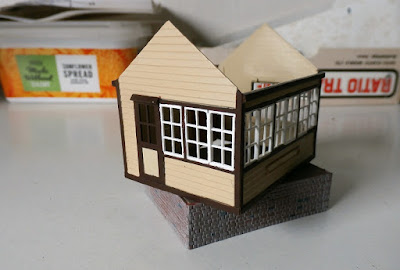 I can't imagine that there aren't many of you losing sleep wondering what's happening with the AotC signal box build. Well possibly not as many as who are worried about Phil Parker's GWR steam railcar.

Like the rest of the AotC project it's a very slow burn build and has hanging about on the desk for months. I occasionally pluck up the courage to do a bit to it. Yesterday was one of those moments. Fitting the window units in was a minor fiddle, but painting them was going to be a nightmare. Not quite as bad as SECR loco lining or something equally MRJ worth, but still. All done now and about the best I can do with shaky hands and a paint brush.

Incidentally, what would be the equivalent colour in the acrylic Humbrol range to GWR coach brown? This is a G*mes W*rksh*p 'scorched brown' which is just about spot on but has nearly run out and is out of the range now.
Posted by Chris Ford at 14:53 2 comments: