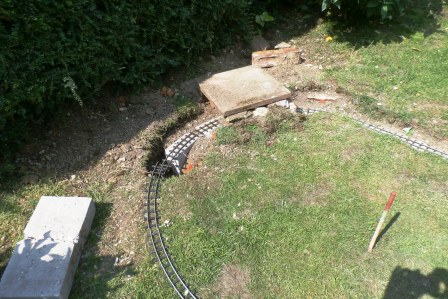 A bit more on the curve: The curve at the other end wanders around all over the place, here on the left was going to be simple... or so I thought, using Peco 2'6" rad setrack curves. Most of the line at this end is laid on 4" wide building blocks; slight engineering overkill, but easy to remove being let into a hole, levelled up and the track screwed to them with 25mm No4s. Any changes or new house owner will just need a small crosshead screwdriver and to lift the block out before backfilling.

All went well until I got to about 2 o'clock on the photo then the spade hit a brick. 'Building rubble' I thought. No chance, it was laid, and kept going down. As this was sheep grazed downland pre-1935 I though gate post or possibly drinking trough base. Then there was a bit of black electrical wire in it and it dawned on me that I'd hit the air raid shelter. Next door but one pulled his out last year, but that was corrugated iron and at the top of the garden. The lavs were inside when built so it's not one of those. Anyway the job suddenly tripled in time length as I set to work with a 2lb hammer and a bolster to break all the brickwork up remains of which can just be seen at 12 and 9 o'clock on the curve.

I'd decided to put a Tri-ang style tunnel over to visually break the curve so a few bricks and a paving slab went over the top with clearance to W & L loading gauge which is more than enough on this radius.

Art of Compromise and outside in the garden 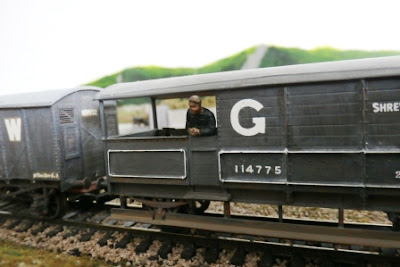 Bouncing around between different projects seems to be the order of the day and this is turning into more of a weekly report. Above and below are a couple of snaps taken in available light of the AoC. Top is an absolutely straight build of a Ratio GWR brake that was done years ago complete with squeaky plastic wheels. To its left is a Coopercraft V5 van with the firms replacement vent ends.
Below, a more overall shot of the coal dock with a mix of stuff parked up. L-R: a Cambrian Open A, a Slaters PO, both straight builds and an Arfix PO body mounted on a Parkside underframe. I like the way I've managed to get these to all have a slight prototypical dip so there visual horizontal line is imperfect. I must paint the coupling supports. 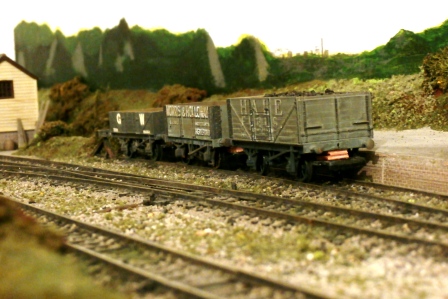 Moving outside, the line is now just about complete. As you can see it's simply a loop - a trainset complete with short tunnel on the left. This is the only flatish part of the garden. North of the third stepping stone the ground lurches upward meaning that the lower bit of the loop is raised slightly and the upper is cut in. I was chuffed that I'd only gained an inch in height by the time the loop was complete with just a Poundland level to work with. More on this later. 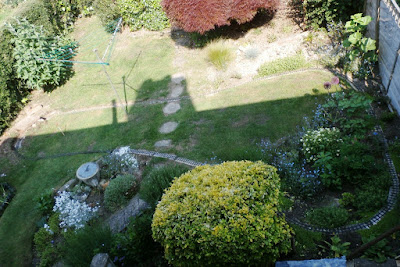 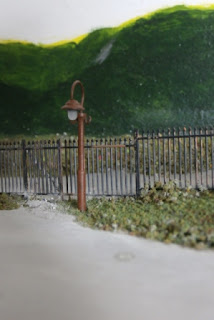 I'm plugging away on several fronts; all unrelated. The on-going as far as here is concerned is the Art of Compromise which now has a few lamps dotted about. Nothing remarkable, just the Ratio GWR swan neck variety. It's a nice little kit which can be built in a number of shapes. The standard above, with a straight post and single lamp. Below with a bracket, no swan, and just attached to the station shelter. 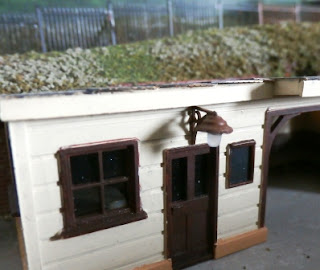 Now that it's June,a push to get the garden railway finished. Only about 15' to go now and guess what? I'm six fishplates short. The train however needs a brake and a bit of work has been done on this. The jumping between scales is fun: from the fiddly lamps to the huge bits of 80thou sheet. 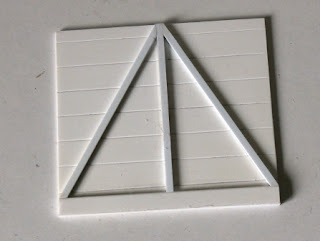