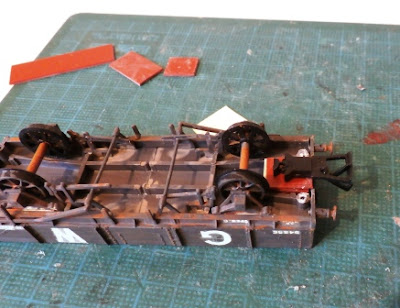 Managed to get a quiet half hour yesterday before all the seasonal stuff started. This is an old Ratio Open C wagon that I built quite a while ago and is in the pile to be coupling'd for the AoC project. A stack of building sheet scrap checked against a height gauge made from the same stuff and all done. The entire thing done with UHU which seems to work well on the slippery plastic of the Bachmann coupling once its had the surface filed to provide a key.
Posted by Chris Ford at 11:16 1 comment: 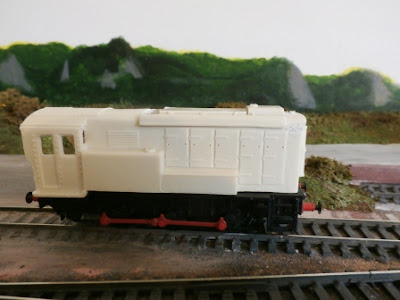 Not much going on as it's that time of year again. Panto with a load of people I've never heard of as usual. One of these TV twirlies made the mistake of 'coming to see where you all live' and 'isn't it nice down here, like a cave.' Not the kind of thing you say to a bunch of slathering musos who are about to spend a month in a basement starved of natural daylight and living on a strict diet of bargain Fosters and Pot Noodles with only a small blue light to see by. You can only imagine the smell. The bass player offered her a chocolate finger and she soon scuttled off.
Anyway... a few bits stuck together on the shunter using epoxy which I hate, and gaps filled with Squadron. Plus a few holes drilled for handrails and the like. Quite a different project this one. Lots of possible detailing work and a bit out of the ordinary.
Posted by Chris Ford at 00:14 3 comments: