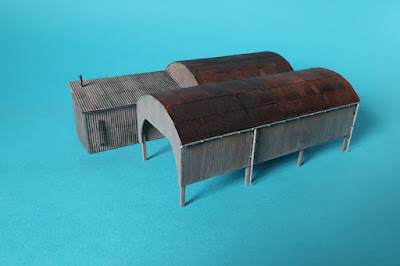 Well. Here we are again. The problem of course is losing a hobby to a profession. While I am spending my days pushing other people's toy train stories around the screen it leaves little time for me to do the same. Or more to the point, after reading 'I cut the 2" x 1" and blew my nose' several times during the course of a day I have little inclination to do something similar. It's an upside down life though only for another month. The supposed building of a N gauge layout, while far from abandoned, continually gets put on the back-burner while I attend to something more pressing. Publication schedules being what they are, any time for this comes at the  end of a month, by which time I've completely lost the thread of what I was doing and it takes me a while to get going again. The warehouse above is a case in point; really only a weekend's work, but has taken much longer mostly because I forgot what I was doing with it. It of course is the bastard child of some corrugated sheet and a Ratio carriage shed. This project will get done, though the target point of late August appears to have silently passed me by.
Then there is the blog. Ten years of fairly regular posting though I realised that due to the above I was starting to just re-post youtube videos. Interesting though they may be, it's not what this page was about so a break has been taken. A period of flux and transition will soon appear, but who know how it will all pan out, perhaps a complete re-flip of lifestyle, but then there is always government to contend with.
Posted by Chris Ford at 20:19 3 comments: