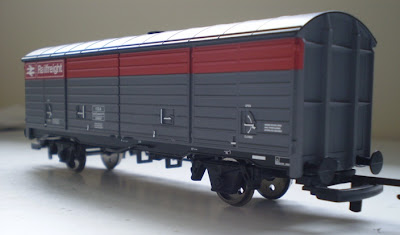 A quick snap of the finished VGA. The first shot is the lowered by 2mm, but otherwise untouched model. The second is the repainted and complete refurbishment. The Hornby moulding is excellent, but the whole thing sits too high and the ends (and possibly roof) should be red to match the stripe. The other thing which jars slightly is the moulded roof vent which I can't see on any prototype photo.

So changes were: lower by filing 2mm from the top of each truck, file off roof moulding and replace roof rib, re fix trucks, paint ends and roof and weather using wet wash then dry brush.
I've left the huge Hornby coupling until I decide what to use instead.

A visit to Scaleforum yesterday turned up a 'Modern Image' layout which wasn't a million miles from what I envisage the home for the VGA will look like, though obviously in P4. Now that I'm intimate with this wagon I was surprised to see that the example on Callowland was, despite being re-wheeled for P4, still bouncing along on tippy-toes, buffers a scale 6" higher than the next vehicle, and sporting the questionable roof vent. 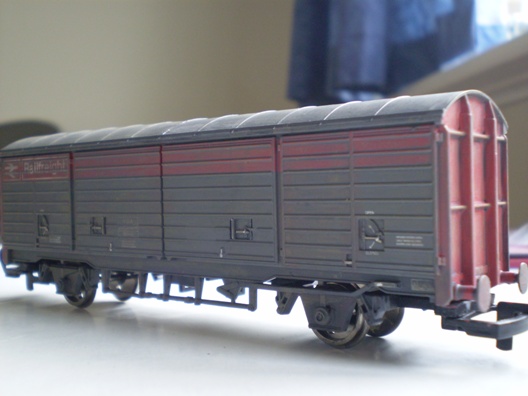 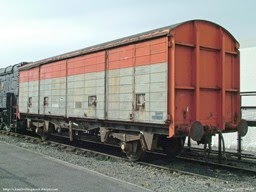 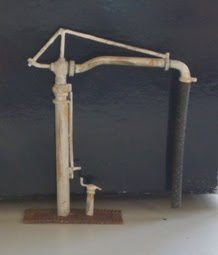 Ratio N gauge water crane
Cruelly enlarged- the 2mm scale watercrane just painted ready to put onto Unnycoombe. Standard Ratio kit, slightly adapted using the photo on the back of Stephen Williams GW Branchlines Vol2. i.e. no brazier. This makes the look a little lighter and less cluttered. I think it's always important to stand back and look and decide whether something looks OK visually rather than what SHOULD be there. The two don't always fit. 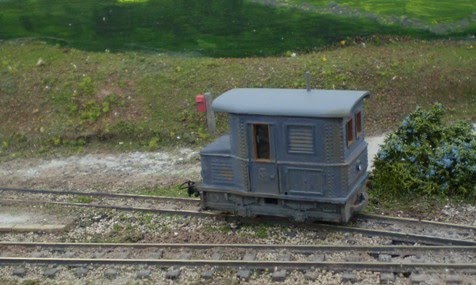 Shot of the Eggerbahn ex-electric loco. I was looking for items of small motive power for Garn and this is such a good little runner that it seemed daft not to use it. The pantogragh was removed, the roof filled and sanded smooth, a short exhaust pipe added and the whole lot repainted. The inspiration for all of this was a similar loco on Paul Windle's 'Rothby'.

Note also the hand-carved postbox mounted on a matchstick. I find it better to just add one or two little details like this to catch the eye rather than cram a layout with all the MickeyMouse flashing-light extras. Less is more. 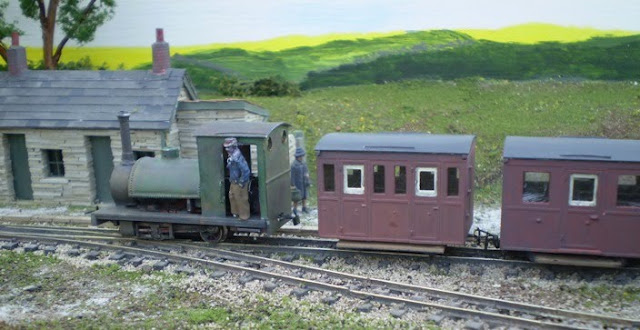 In an effort to get the half a dozen photos of Garn onto the blog here's another.
'Miles' and the Colin Ashby coaches in front of the station building. Loco is much bashed Chivers Sir Hayden on an Ibertren mech'. Building is the usual card/paper/bits of plastic mixture.
Posted by Chris Ford at 11:25 No comments: 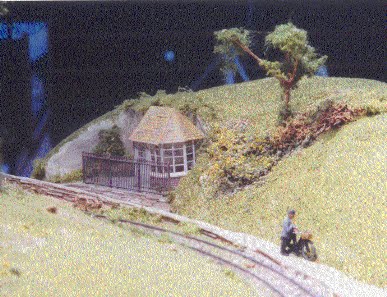 Wood End petrol station
Scary to think that this was built 10 years ago. This was the tiny filling station based on the one still standing at Rodmell in Sussex. Rather disappointingly a photo of this never appeared in the RM article in 2004. All that remains is this snap probably taken in 2002 and scanned in on a slightly problematic scanner, hence the hazy reproduction.

Using kit parts
The basis of the model is a Wills greenhouse kit, the parts of which were used for the brickwork and the window frames. As can be seen there are no pumps as we know them although there are/were on the protoype building. A lovely book called 'Oil on the Line' remarked that many early rural petrol stations dispensed fuel from cans, pumps coming in bit by bit in later years. So that's how we left it. It was this small corner which tipped the balance to gain us the Reinier Hendriksen award for Wood End at ExpoNG that year.
Posted by Chris Ford at 12:17 No comments: 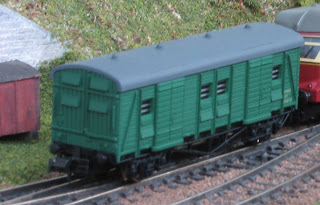 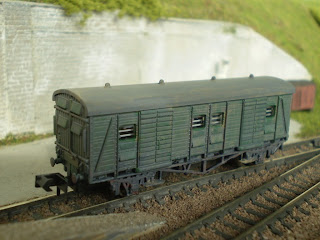 Before and after...
During the showing of Unnycoombe at the Worthing exhibition it was decided that the RTR stock was too garish. A job now in hand is to weather and take off the shine. 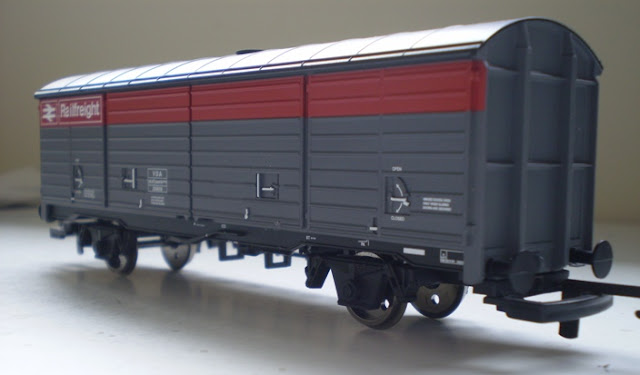 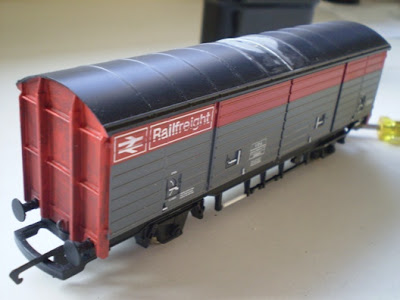 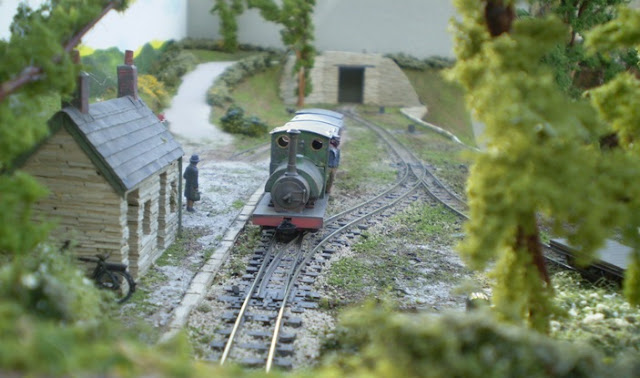 Long full-length view of Garn with the card-built station on the left.
Posted by Chris Ford at 16:55 2 comments: 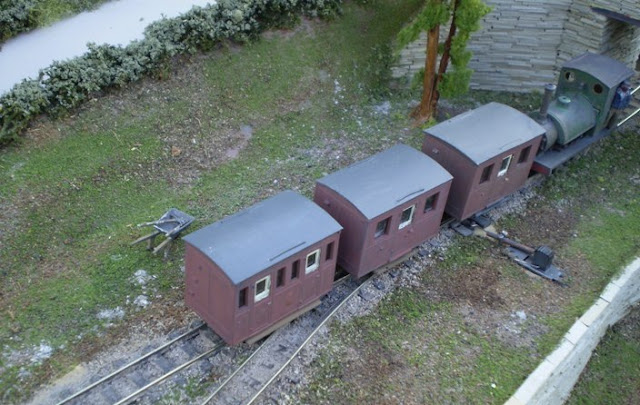 'Miles' and three Colin Ashby coaches at the right hand end of the station. Note the very obvious point control situated to be advantageous to front operation using a small DPDT switch as the lever and as electrical switching. 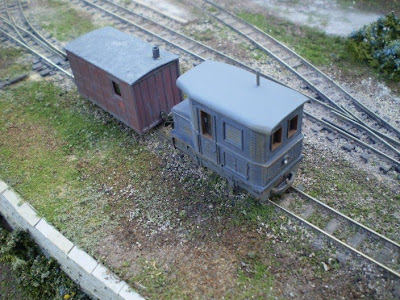 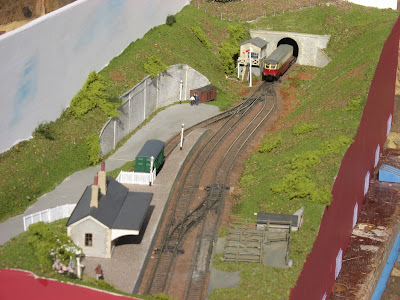 Overall shot of layout, all 43" of it, prior to it's first exhibition outing. Station building is standard Ratio, signalbox is highly bashed Kestral with new stone base to match everything else. 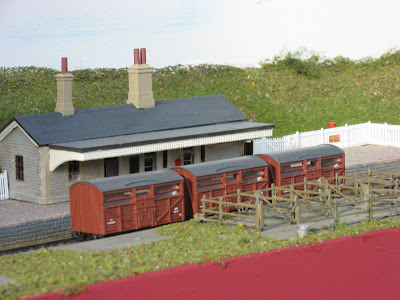 Peco cattle wagons. As this time with the interiors unpainted so the white plastic glares a bit with the flash.
Posted by Chris Ford at 10:04 No comments: