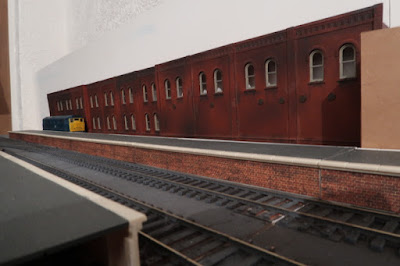 A quick update on this.

Wedged here against the back with Mr. Hill's signal box mock up - it's very top heavy - I'm about 90% of the way there, just  a little roof furniture and down pipes etc. to do. Yes it is a shortcut of sorts in that it would have taken me forever to chop out all the window apertures and I wouldn't even have attempted all the baby arched brickwork at the top. It's not been a joy though as I'm not used to manoeuvring 2' 6" of flimsy building around. Small sheds from Wills sheet, yes, half a layout, no. I'll be glad to get it squared up and firmly stuck down. To which... 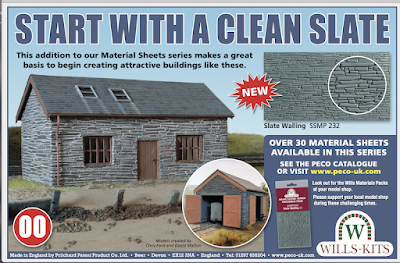 Interdepartmental shift being what it is, the slate sheet box has ended up here, via me dumping it on Dury's Gap for photos. Note to self: build a proper photo plank. 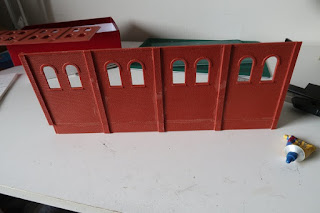 Moving swift on through what I've realised is quite a lot of buildings. This seems to be my task in life now with not only this but 4mm and lots of 2mm structures on the horizon for RM. Here I'm fighting somewhat. The DPM HO railroad modular kit is out of Mr. Hill's back room stash of things and is in the region of 25+ years old. This may be a factor.

The plastic is almost cast, is hard and unforgiving and though not brittle, as yet is resistant to the usual liquid solvents. This means I had to resort to a bottom-of-the-drawer tube of poly cement which was actually Mrs. F.s fathers. Surprisingly it is still usable and has a glorious set of fumes which cuts the modelling sessions down somewhat. No wonder he's no longer with us if he was using this over  a long period. There is a slight diagonal wind on some of the sheets. Probably not a problem with DPM's expectations of a square building, not so with my series of 'flats'. Some substantial 100thou beam-work has sorted it.  Now the painting of thirty four windows while the sleet fall against the window. 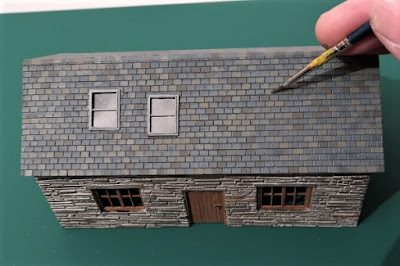 One of my tasks this week is to review the new Wills slate walling sheets. It was suggested that the best way to do this was to build something. Errr... something not too big I thought. A quick hunt around and I came up with the former Brass Foundry at Boston Lodge. Now sandwiched between two 'delightful' 1970s extensions it has lost not only the chimney, but much of its charm. I've cut a middle ground between the modern building and that which features in period shots.

The walling by Peco's Dave Malton is rough slate waste at the large end of the size spectrum and despite me not being too sure when it turned up, actually works really well. Combined with the usual bodge it and scarper Wills windows and door bashes and some of the wavy Wills slate roofing, it hasn't come out too bad thus far. Timberwork and rainwater goods to do. 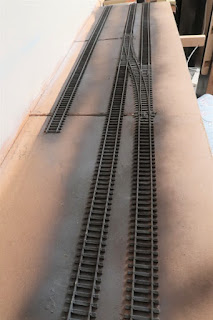 Moving forward at a rapid snail's pace. I managed to get a dry spell yesterday lunchtime and it was out with the pre-warmed rattle cans. A waft over the backscene boards with a little white and the track was coated with the now standard camouflage brown from the side and grey from above. Now some platforms.

It's been noted in certain quarters that there are shortages of various bits and pieces. In some ways this is a good thing as it's forcing modellers to delve into the cupboards more and actually build things that were originally bought for this purpose, but because we are driven by the 'new', often languish. I'm guilty of this and there are at least two or three complete layouts that could be put together fairly quickly from stock. Not stuff I've used before, but a totally new subject. More on this later perhaps. There is also a wide consensus that  we should be using this stuff up. The above platforms are a case in point. I'd logically slightly over egged the setrack platform section for Hopwood as I wasn't sure how it would pan out. This left me a couple of packs over which were stored. It now seems churlish not to use them up, but of course this means topping the stock up to finish the job. Is this a skew way of doing this? I may now be in a situation where I can't get these top up items. The customer demand is sky high due to the sudden availability of modelling time, and on the flip of that the manufacturers are in a socially distanced production mode which slows availability. My hoped for mail order set from one of our nice retailers may not be as successful as I'd hoped for. 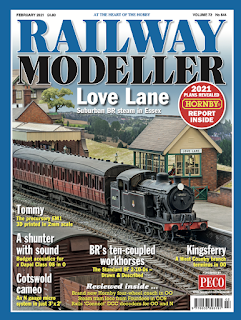 Out now. The last instalment of the O gauge.
Posted by Chris Ford at 19:17 1 comment: 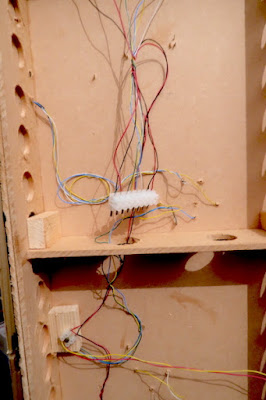 With the layout tested it was time to tidy the wiring and fix it to the bottom of the board. I now do this with blobs of hot glue. It ain't pretty, but it works. My wiring is functional and is colour coded, though to some is pretty crude. This doesn't really matter. There are some who I think only use model railways as an excuse to add complex control systems. Me, I just add two wires to the rails and it all works. This is how DCC is often described to me and then the explanation drifts to high voltage bus-bars and stay alive systems. then they wonder why I'm happy to stick to two rail analogue with bits of second hand cable glue gunned to the board.
Posted by Chris Ford at 13:40 4 comments: 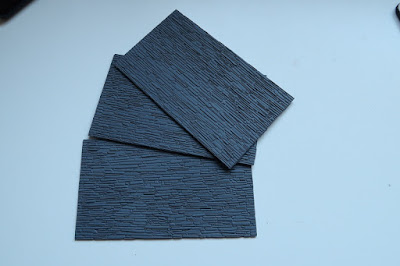 One of the jobs for this week is to build something out of these that turned up on Friday from Devon. The new Wills slate walling. First impressions are good, my only reservation is that the slate pieces are at the large end of the spectrum so may mot be suitable for small buildings. However on the flip of that if you have large areas of retaining walls to do, then these are ideal where a smaller pattern wouldn't be. The large-ness may well make them ideal for some cross-scaling to S or 7mm and I could easily see small buildings being build from this in the larger scale.
Posted by Chris Ford at 14:17 2 comments: 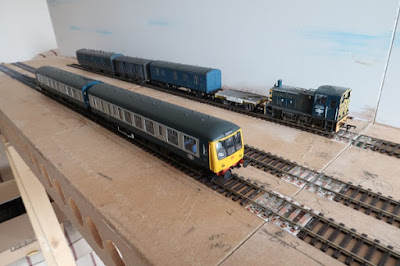 With the track and wiring done, time for a test, before the wiring gets glue-gunned to the baseboard and tidied. All went swimmingly until the straight-out-of-the-box Hornby Mk1s appeared. The last thing that you expect to find and track issues. However a slightly out joint was located despite everything else from Lima to Gibson wheelsets having no problems.
This is proving slow gong for some reason not least my inability to pin a particular date on it with a stock choice running from green to Sprinters. I managed to get away with it with Hopwood probably because it was a) a commission and built simply for the articles and b) I'd deliberately left a certain vagueness about it. This is different.
Posted by Chris Ford at 20:11 No comments: 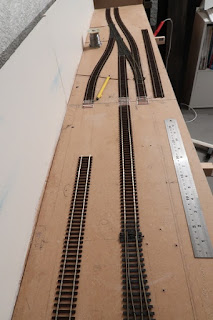 New Years Eve was weird. No work and even the cut-down home celebrations were muted. I haven't drunk anything all year anyway aside from a couple of pints of 'I'm-driving-shandy' in beer gardens in the summer. As the son-of-a- brewer, home drinking is strange at the best of times so I just haven't bothered. Does a drink-free year mean that I'm tea-total?

I tend to look forward rather than back, so no real need to say anything about 2020 (except that it's easier to type than 2021). The plan here for the next period of jolly Jonny Foreigner-free modelling is the above, with track from Devon and MDF from Wales to the fore. The track is very slowly inching its way toward the stop blocks. I'd normally work a lot faster than this, but I keep being distracted by said track people in Devon asking me to sort words out. Discussions in the last few days have mooted a further sister layout using a similar, but wider, styling. There is also the idea in the back of my head for a whole family of similar pieces to use the bits that are in the cupboard - something Californian is a possible as is something Franco-Germanic, if we're still allowed to do that now that we are at the complete mercy of the Eton educated and Mike Ashley. There is also a distinct possibility of something in N gauge for the above. In all, 2021 will be busy. All I have to do is survive.