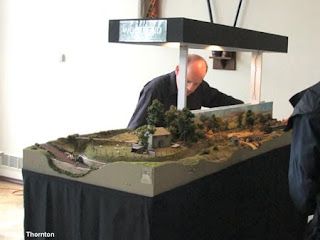 Wood End with the rebuilt corner section by Alan Martin who purchased the layout from us, and as far as I know only exhibited once in this form. the new section is deeper than the original and possibly a little wider than the original 30". I have to admit that while he added a couple of things that we had deliberately left off, like the cottage, the result is a great improvement. 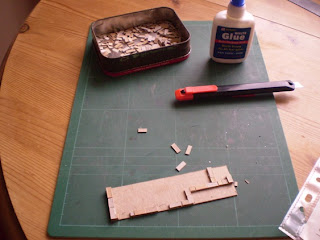 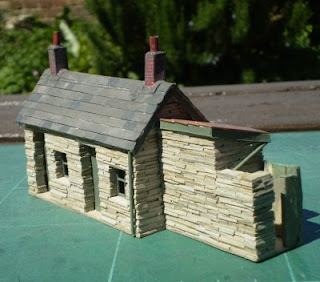 The more I move on and the older I get I realise that I get most satisfaction from the things I make myself. The huge range of commercial items is all well and good, but...
This is a case in point. The original structures on Wood End were built from card blocks. So well was this received that I did it again for Garn. There is a longer story, but not for here. The 'station building' on WE was never finished, and still isn't by all accounts; the Garn structure however did get done. It's the same Corris design built from 4mm x 1mm card blocks (from the backs of refill pads) laid one at a time. The rest is a mix of brick-paper wood strip and coffee stirrers. With paper slates.
I like doing things like this; it's proper modelling.
Posted by Chris Ford at 19:37 No comments:

Building a Class 121 from a Lima railcar 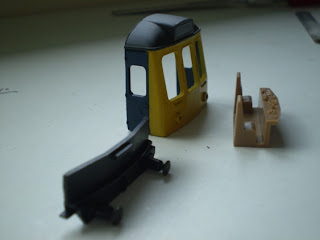 The title would indicate that this was at least a steam age piece, but no. It is historical in as much as the prototype units for the project were built almost 50 years ago by Pressed Steel in 1960, and as far as I know there are still a couple of them floating around the system. That’s the historical prototype; this is also a historical cut and shut conversion.
The Lima DMU appeared in, I think, 1980 and it wasn’t long before several people pointed out that it was in fact two Driving-Motor-Brake-Seconds, not a DMBS and a trailer, therefore not impossible, but unlikely. There appeared in the modelling press a number of articles demonstrating that it was easily possible to convert the Class117 DMBS into a Class 121 single unit. Three of these articles were squirreled away by yours truly: Colin Hayward RM May 1981, Chris Ellis Model Trains April 1981, Tim Shackleton MRJ 93. All articles approach it from a different angle: the MRJ is done much in the house style and is the extra work to end up with the Class 122. The RM and MRJ pieces are also much concerned with renewing or improving the drive. It was however the Model Trains piece which tipped me over the edge. Not only had I kept the articles, but somewhere along the line I’d picked up a Blue/Grey 2 car DMU. The proposed mid ‘80s Llynfordd layout would be just the place for a 121, to complement the Sprinter units.
I’m not a fan of cut and shuts and even with the aid of an engineer’s square and masking tape guides I didn’t get the cuts spot on... but it’s OK. This is very much a work in progress post; the basic body mod’s are done and the roof strip replaced. That however is far from it finished. The bufferbeams need a lot of work (the couplings WILL come off this time) and there are steps to add. The inside will need some attention too. I seem to remember, on my one and only DMU trip that the seats were a standard BR blue cloth. There is the possibility that this work could go on and on up to the mythical MRJ standard –if I were capable that is, but I may just draw the line at a basic conversion.