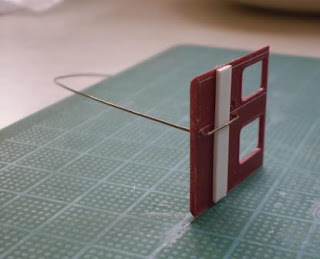 I noticed that Mr Rushby's short shunter had no handrails. I pondered this for a bit. The kit does include some (plastic) but now the rear balcony is no longer there they don't visually work. I tried to think where you would want to pull yourself up from, and decided that low on the door up to the handle would be about right. Wire, drilled and superglue. 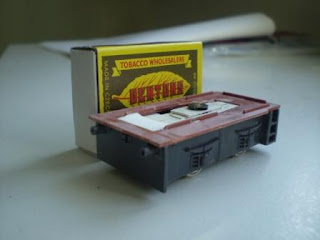 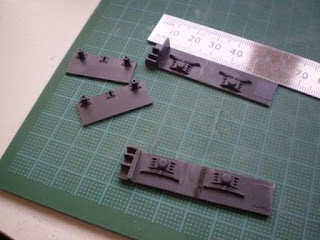 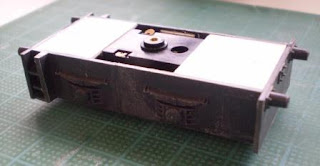 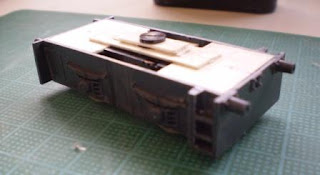 Rhiw needs at least one private industrial shunter. An 03 will do, but the draw of different things is too much, so work has started on a conversion from a Knightwing kit; the one much beloved of the 009 mob (which is why I had it). So combined with a Tenshodo spud that I had in stock from an abandoned project which slips my mind, makes it a cost-free new game.

Taking a little inspiration from Neil Rushby's article in RM (Dec 08) the 'chassis frame' is narrowed to 30mm and shortened to an o/a length of about 56 mill. This isn't going to be an exact copy of Neil's piece for quite a few reasons.

The problem with mounting a spud is that it's not flat-topped, in fact there are three steps between the lower section and the screw. The first is 2mm, so two thicknesses of 40 thou. The rest is obvious from the photos. 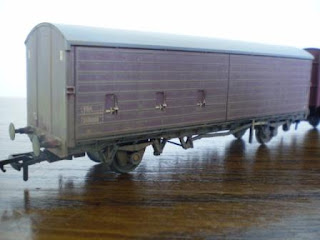 After looking a many photos I had an afternoon of van weathering. The consensus is that most post 70s air-braked vans are paint-faded and dusty. the fade is a tricky one putting faded paint on as a base colour is one thing, but fading paint that is already there? I just went with the brake dust and grime. No German grey this time which is unusual for me, just a bit of brick red and earth (Humbrol acrylics). 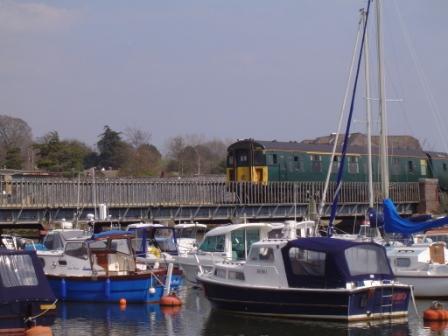 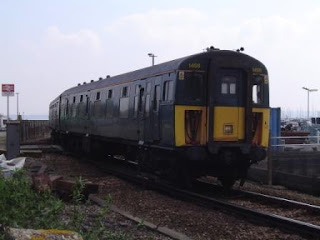 Further to the post a little down the page, an old mate sent me these today. Taken last Thursday at Lymington. So it's still possible to ride on slam-door stock until at least May this year.
Photos: Simon Hargraves. 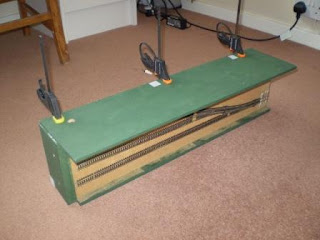 A fiddle yard for Garn
It occurred to me that Garn has two shows this year and I really should tidy a few things up. It has been recounted earlier that the whole thing was thrown together in odd circumstances, originally being front operated, but then for some reason not. The set up is a pick up and go lash-up to sit on a standard trestle table. The FY is a case in point; built in a hour out of scrap bits of MDF from under the spare bed, measuring just 2'6"x 6" in plan with some redundant Peco points.

It has been taken out back to front, so I thought it best to reverse this by moving the back wall to the audience side. The thing with FYs is how much to leave on show. I tend to go for fairly open for ease of access with enough going on around the perimeter to avoid the stock falling off. To this end there will be an end-board added to the left of this shot. 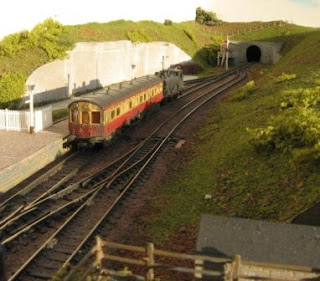 The last train of the day departs Unnycoombe.