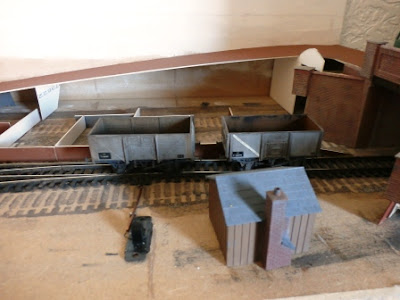 The Art of Compromise plan made a bit of a leap over the last couple of days. The bridge is now fitted and the roadway cut in. I'm now weaving the honeycomb of card for the platform and the bank behind out of mounting card off-cuts. this whole project is now taking a differnt significance as it by default the serial project for the magazine.
Posted by Chris Ford at 09:43 5 comments: 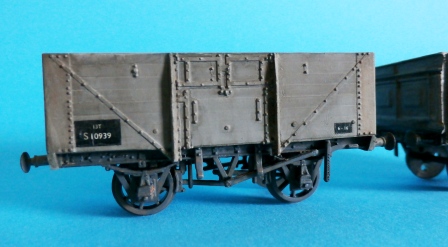 This is what happens when you say yes instead of no. With the narrow gauge book finally done and buried amongst the Pete Waterman books on amazon (outselling PW at one point; I should be so lucky... lucky, lucky....) there came a figure on the horizon saying ' Go south my boy, go south'. As so it came to pass that my life is now swamped in the unlikely, but remarkably engrossing world of research and building of Southern Region stuff. The quick snap above is a Southern Railway 12 ton open, upgraded post war to 13 tons. This from the Cambrian kit with cast buffers added and Modelmaster transfers. Quite fun really. I do like a few wagon kits to brighten my day.
Posted by Chris Ford at 10:12 2 comments: 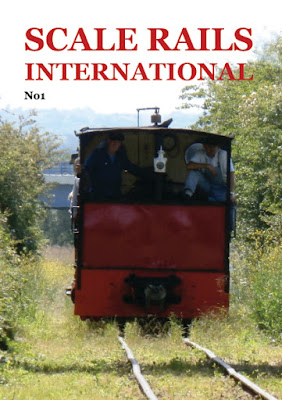 If you'd wondered why it had all gone a bit quiet here of late, then I'll tell you the reason. There were three of us munching through a post exhibition curry when someone mentioned that the publication of Model Trains International was ending. For those of you who don't know, MTI was a slim bi-monthly mag aimed primarily at those short of layout space. The subject base was quite broad, none of this us and them that all the other magazines have; British, European, American, NG, you name it, all pitched fairly low (i.e.not full of finescale) and with an almost 1940's style of good budget modelling ideas all in a subscription only mag.

Back to the curry: between mouthfulls of Gurkha's Revenge (yes really) I said that someone should pick it up and run with it. That's not quite what happened, but there followed a brace of phonecalls between self, writers, and MTI's editor Chris Ellis. The result is that a dozen weeks and a very sharp learning curve later Scale Rail International No1 was published. Unlike MTI it is is in colour and is presented in a compact package of an A5 magazine. Like MTI it is bi-monthly, full of modelling ideas and plans and with a very broad prototype base.
Email me via the profile page if you require more details
Posted by Chris Ford at 16:37 No comments: