Picking up on James' comment below a little research was taken. Here's the question: The Coopercraft cab above has square-ish windows, whereas all the photos that come up on Google like the one below have the teardrop shape. Why? 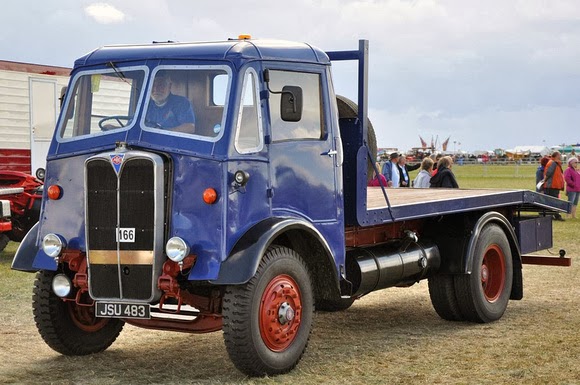 PS.
Here's the photo that Paul B points to. Quite a difference from the one above, and still different from the kit cab as it looks as though the sides cut in. What needs to be done then is to add the bump bar on the front and move the headlights from front-mount to mudguard mount. The wheels in the kit look a little small to my eyes, but as can be seen here, they wouldn't look out of place on a Morris 1000. 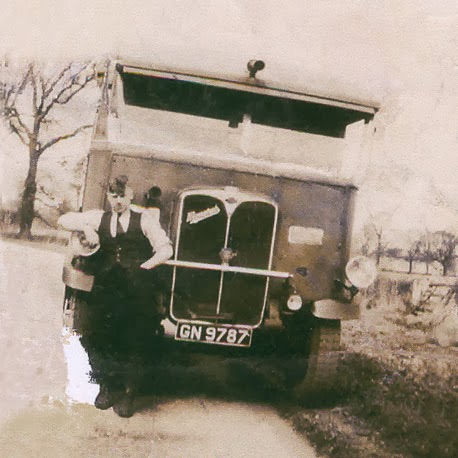 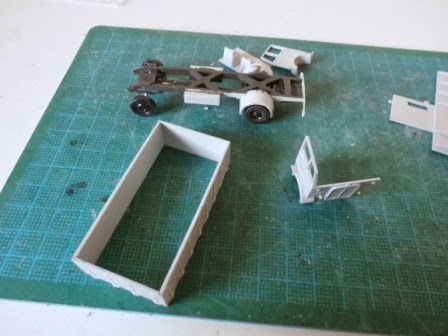 I did think that this would be pretty quick to put together, not so. The mouldings are fairly good, but there is a little flash to clean off. More than that though is the poor mould-making; the front mudguards in particular. These look as though the original was made from two separate curved pieces to get the overall width, however they aren't lined up so there is a pronounce step across the cab side parts.
So far then it's a nice little kit that needs a bit of work to get it to where it should be. As I mentioned earlier, the instructions are a bit vague and my knowledge of all things lorry is not all that comprehensive, when it should be as I spent a good portion of my early teen years working on the (then) modern equivalents.

The secondary issue is my current use of Humbrol Poly. Not impressed. I have two bottles here which were given to me by Mrs F's father when he gave up modelling a couple of years back. It's dreadful stuff: very fumy, and too fierce. The MEK that I use as a default evaporates quickly and bites in the same manner. This however takes a long time to grab and even five or ten minutes later is still in melt mode. It may get thrown away soon, but I may keep the little square bottle as it seem virtually tip-proof.
Posted by Chris Ford at 10:34 1 comment: 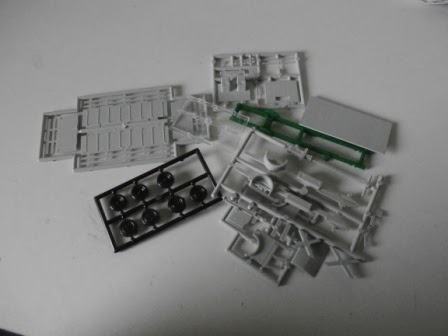 Just for something different to do over the break, I picked this kit out of the pile: a Coopercraft AEC Monarch. I think I picked this up at a show for £3.50 simply because it was there and because I hadn't built one.
The instructions are a bit sketchy and if you have no commercial vehicle knowledge there is a bit of guessing. I'd worked out the at the chassis cross pieces should be level with the top, but the front one? I cut out the gearbox/drive shaft piece and waggled it about until I thought that it would go behind the axle and lower than the other three. Someone shout if that's wrong. 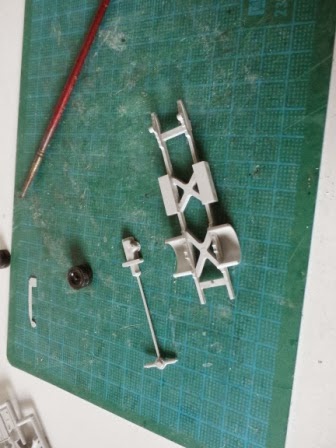 I that's your thing, a Happy Christmas to you.
Posted by Chris Ford at 11:49 4 comments: 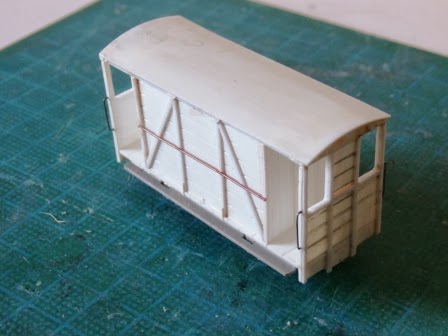 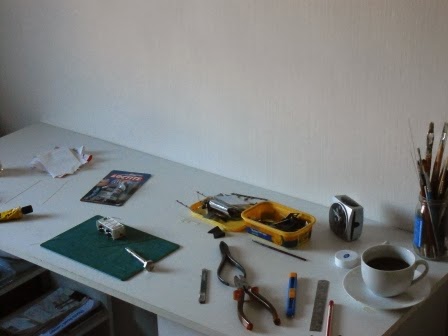 For those regular readers it will come as no surprise that I've been in moving house hell. The biggest problem is that overnight I lost my work space. It did exist, but it was undecorated, with a carpet fit only for a squat, and all the other junk piled up in it. Now, thanks to Mrs F's hard work mainly, I have a vast room some 13x 8 to work in with new carpet and plain light-reflecting white walls. the bench is back in and I can work without having to put everything away each time. Bliss...

I pondered this morning after I noticed that my navy blue hoody that I was just about to go to work in was covered in the white dust from the plasticard that I'd spent the previous hour sanding and filing. It occurred to me that if I'd been a chef, the white powder could cause a lot of problems if I have to fire the servants. Luckily my culinary delight this week has only stretched to beans on toast and Weatherspoon's meal deals, so probably not too much to worry about.
Posted by Chris Ford at 22:53 1 comment: 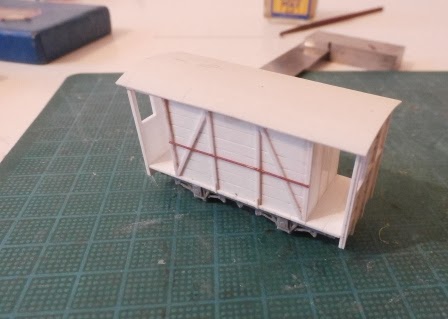 A little more work on the brake this afternoon, now with both ends on and the roof roughly cut and rolled.
Posted by Chris Ford at 00:28 No comments: 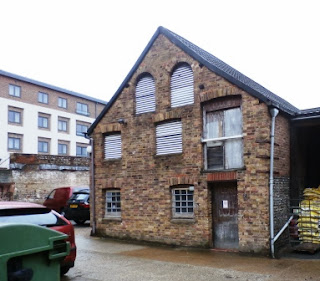 I kept walking past this and thinking that it would make a nice basis for a model. Yesterday I remembered to take the camera with me. Tucked away behind Bunce's Hardware, it is used by them for storage. I like the very tight second floor and the corner wall ties. 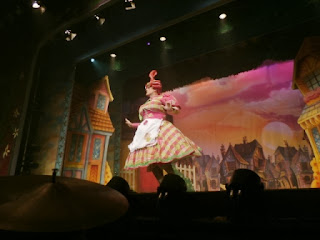 An hour later and I was looking at another old structure. The old bugger is suffering with no voice , but troops on regardless.
Posted by Chris Ford at 21:02 1 comment: 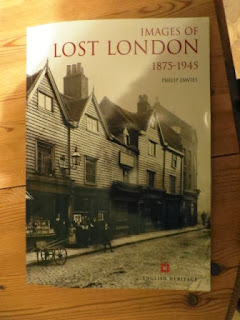 As I'm wandering round wasting time in Worthing most days between bouts of coffee scrounging and getting sprayed with glitter by TV gardeners, a natural point is to use the great WH Smith library. This caught my eye a couple of weeks ago and I finally caved in today. 143 pages of B/W photos taken on plate cameras. No specific rail items, but a hefty resource for the modeller especially if buildings are your thing. I tend to work on the 'John Reeve 50p rule' - if the cover price is lower than the amount of useful photos @ 50p each I'll buy. If not, I'll think about it. This priced at £5.99 is a bargain.
Posted by Chris Ford at 23:15 2 comments: 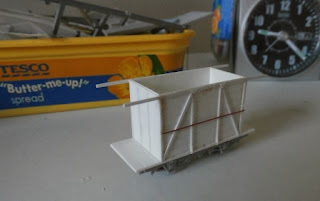 More progress on the brake van. Roof, ends and brakes to do. Behind, the famous scrapbox.

I note that blogger is playing up again. Unsupported browser... I'm using Windows 7 and Explorer 10. Is that how fast the obsolescence happens now?
I know Mr Fulljames will suggest wordpress, but it seems a bit complex compared to this. 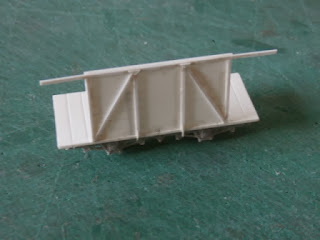 Despite having two shows a day and being 'disturbed at work' by other modeller/bloggers, I'm getting a little bit done on the final bit of the rolling stock section. This being an almost scratch built brake van based on the proposed C&MLR proposed item in Nigel MacMillan's book.
Meridian Tal-y-llyn coach chassis and the rest in plastic.

There have been a few magazine articles on bridges of late , but few show the most visible bit in model terms - the top. This at Ravenglass earlier in the Autumn.
﻿ 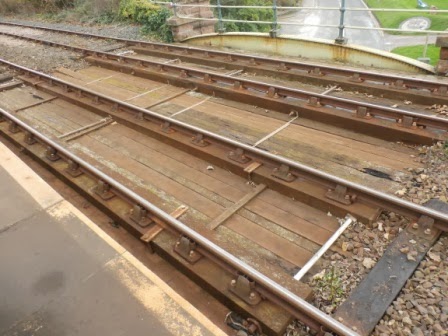 009 railcar on a Kato chassis 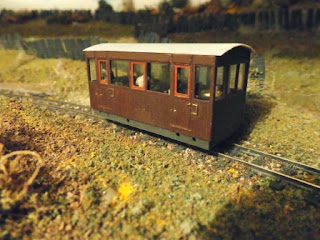 Railcar now finished as above.  A fairly quick build on a Kato 103 chassis with a cut down Bro Madog coach from Parkside.

It's panto time. So the likelihood of getting any thing done for the next few weeks is low as I've been banished - to use the stylistically appropriate word - from the capital this year down the A24 to the South Coast. I could have had the rather shaggable Claire Sweeny at the Pavilion, but no, I get... Charlie Dimmock. *sigh*.