I'm rather puzzled.
A couple of weeks back (because she was passing) Mrs F. picked up a Gaugemaster handheld controller for me from the company shop. This to act as a spare for the aging KPC. On opening I found that there is neither a DIN plug connected, nor included in the box. In these days of simple plug-and-play I thought this odd.

Fast forward to a couple of days ago I popped in (again as I was passing) to purchase a 6 pin plug to remedy this issue. ' We can't help you', was the reply from the kindly shop assistant. Hang on a minute....this is now not just odd, but downright stupid. I and many others plug a handheld into the socket on a Gaugemaster boxed controller on the 'track 2' circuit provided. It's designed to do exactly that. But the handheld controller comes without plug and they can't sell you one to fit yourself.
Does this not smack of minor incompetence on the marketing front?

They can sell you a plug/socket pack, but you don't need the socket, just the plug to go on the handheld that doesn't have one. OK, I go to a lot of shows and it won't be long before I trip over a dealer selling plugs, but what if I couldn't, was housebound, and relying on Mr Postman, and expecting a fully integrated controller system? 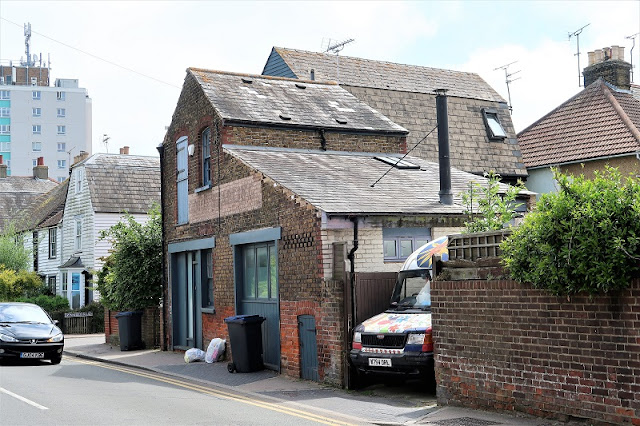 This is near Whitstable station. At first glance it looks like a fairly typical Victorian industrial unit. On second glance it becomes obvious that this is the perfect low relief or corner building as it is so shallow - probably not more than 25' front to back. There have obviously been small alterations made over the years and the second word on the signage may read 'stabling'. I'm guessing a small smithy, though there is no sign of a big enough chimney. 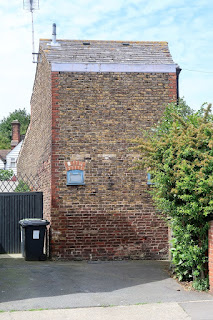 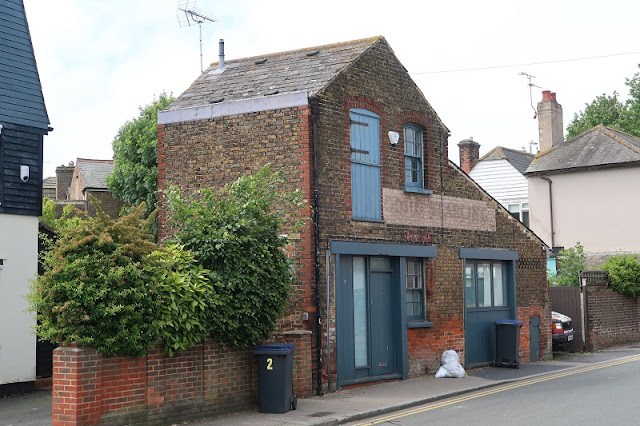 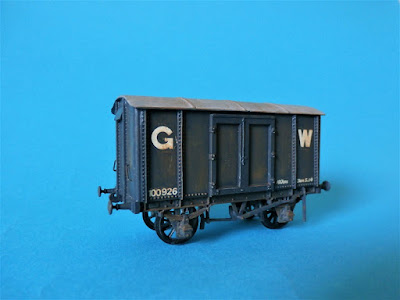 A Rhymney Railway van from a Ratio Iron Mink kit
Rhymney Railway steel van done. Pretty basic changes: horse hooks, commode handles and vents. The brakes I bottled out of. The GWR made all sorts of changes including leaving the Dean-Churchwoods on one side and adding a Morton lever on the other with just a shoe on the RH wheel. For simplicity I just left the single Morton supplied with the kit. Ideally you'd start with a Cooper Craft chassis and Ratio body, but that's just getting silly. Making numbers up from single digits is not my favourite task and the camera makes it look even worse.
Posted by Chris Ford at 10:42 2 comments: 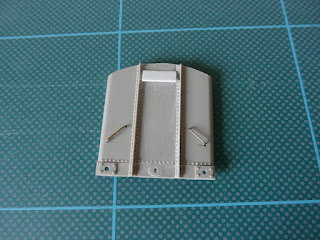 I wasn't expecting to do this. Owing to a bit of sideways planning I'm back on the GWR stock trail again. This time a fairly simple conversion from the standard MINK kit to an ex Spillers/Rhymney version. Only really three things to do: horse hooks, commode handles and a new smaller end vent, which is by far the trickiest bit with all the filing. It's not 100% accurate; the bufferstocks are still going to be slightly wrong and the brakes are a bit of a guesstimate, but the spirt is there. I'd be surprised if anyone notices any difference, so minor are the changes.
Posted by Chris Ford at 21:55 No comments: 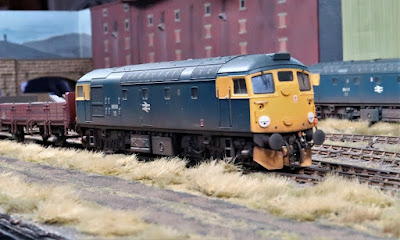 This was possibly a slightly left field event for me. Firstly quite a long way so a very early start. Secondly a bit of an unknown quantity; I didn't know quite what to expect, and there was no plan B if it was crap. I think I was expecting a slightly Scaleforum feel with lots of DCC and sound driven by people wearing black and Slipknot T shirts. Possibly also a very high unobtainable (for me) standard.  Here's the reality: A lot of middle aged blokes talking about freight routing and beer, a very mixed standard of modelling  and a lot of enthusiasm. And no goths.

Longcarse West (above) caught my eye as the best thing there. The backscene was a bit meh, but the feel of a rationalising railway was captured beautifully with some cracking scenics and subtle weathering; not the random 'death by airbrush' that is so prevalent now. The others were a mixed bag down to a couple of why? type layouts which only seemed to serve as a way to get as much digital operation and effects into as small space as possible. One in particular had so may locos on 'tick over' that it reminded me of the bees that swarm around a particular tree at the end of my garden in the summer. You cannot get the required bass response in a on-board sound chip - no you need a big speaker -  and in multiple it was completely wasted. Overall though it was an excellent day and worth the long drive. Exhibition 9/10.  Catering: a basic, but good 8/1. 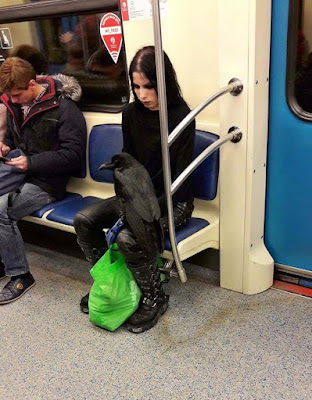 Off to the DEMU showcase which is a new one for me. I've been messing around with blue diesels for decades, but this is the serious end of the game and there is a slight amount of trepidation. There is also a dress code. I asked my travelling companion if the venue was easy to find. 'No problem.' came the reply. 'Just follow the black clothing.' I understand there is a push from DEMU members to rid themselves of the subtitle of 'we are all goths'.


After the video fest of the last few days I pondered something which has been floating around in my head for quite a while. That being the shift from print media. The son of a mate said a few years ago that 'print media is dead'. He has a point; or if it's not dead it is definitely with a heavy cold. In the context of what I do here and what I have done over the last say five years with the writing of two beginner's manuals on railway modelling and the editor's chair of 009 News, certain questions arise.

Firstly regarding the later, there is a continual stream of questions about why the 009 Society journal cannot be published online. The answer for that is fairly simple: print run to cost ratio. Secondly, I note that even though the two book titles to your right are available in e-book form, the hard copy versions outsell these by a very large margin. The reasons for these opposing stats I believe are this: the magazine format is fleeting and is (and always has been) a throw away medium, while people like to read and keep books - they are tactile objects, especially with what are in effect manuals, and which are easier to transfer to the workbench in this form.

So where does that leave us and where are we going next? I'm going to take the mainstream news programmes as a pointer: ten years ago the TV news ignored facebook, twitter, bloggers and vloggers, now a goodly proportion of the content is made up of twitter feeds, phone and  youtube footage and the like. Things have shifted. And railway modelling? Well the print numbers are dropping slowly for all magazine titles and they all have digital screen versions, bar one. There is also a small shift to video footage either within these or in cover mounted DVDs. Change is afoot. People want instant graphic-heavy information, they are not bothered about reading large swathes of text. I used to write articles of 2,000 words, now anything more than 1,500 comes back with a polite 'can you cut it down a bit?' The older generation who were brought up with the writings of Cyril Freezer and the Rev. Denny are heading toward nursing homes and the new generation of modellers are coming at it via smart phones, youtube and DCC controller screens. Graphics are king.

I've had a youtube channel for a few years. It mainly contains short footage of layouts that caught my eye at exhibitions and are shown in the varying light of same. Also there is a bit of footage of some of the layouts featured here. So I've had a toe in the water for quite some time. What is noticeable is that while the layout view counts are only in the low hundreds, the one instructional video on wiring a PECO point through a slide switch is 80,000. Quite a difference and possibly because it's international in application. The overall question is, adding all these points together, should I be shifting this page totally, or at least partially, to a video format? It's an interesting challenge and one that is not without pitfalls. If the instructional format used it throws up all sorts of operation issues, not least timing: glue going off ,paint time, and off course there is the issue of what is a very close view subject being covered by the hands that are doing it .

PS. This has just be mentioned in the comments. It is aimed at marketing bods, which this isn't, but the points are valid. I think that it refers to total switching, which wasn't what I was thinking. Lots to consider.
Posted by Chris Ford at 12:07 7 comments: