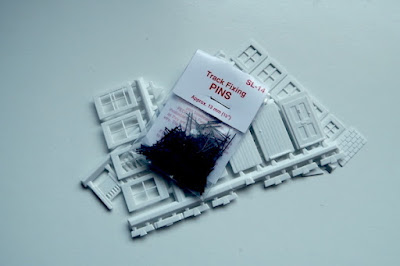 A noodle into the darkest recesses of Surrey yesterday with a trip to Kernow Models. Unlike some people I didn't come away with a Hornby operating timber depot - not sure what I'd do with one if I did.

As with most shops now they are primarily box shifters so the required list of paint was unobtainable, but I did pick up a small top up of windows stock and some pins. This does seem slightly odd seeing as who I work for these days, but a, I was standing there and b, I try to support the retailers. My fellow shopper came away with considerably more in the shape of a new blue box choo-choo and signals.

We need to do this now. Yes, I could have got my small haul in two minutes online and even allowing for the postage, a lot cheaper than the fuel to Guildford. That's not the point.  We have long been told to 'support your local model shop' and this is even more important right now. My spend here was a little over seven quid; not much in percentage terms for  the required daily take for a shop, but if we all go out and spend this in a local shop this week they will still be around this time next year. Don't complain if you don't and they aren't. 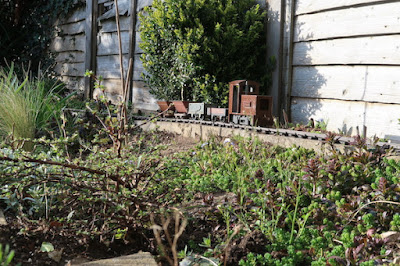 Even with snow forecast for sometime today, excellent news on the rail front. Certainly the earliest in the year since it was put together, the garden railway ran over the weekend. A little trimming back was needed and some sweeping up (why do stones appear from nowhere?). A section of the underpinning had sunk slightly, so some remedial work was carried out to lift it 1/2". Part of this included building a crude passenger platform with some odds and ends. more on this later perhaps.
Posted by Chris Ford at 10:25 1 comment:

A small chink of light appeared this week. I got a short email asking about a layout for a show in sunny Eastbourne - not  town most linked to major exhibitions, though it used to have a very active club, an American NMRA chapter and no less than two model shops.

I've been saying to anyone who would listen over the last year that shows would re-open with the very large and the light and fleet-of-foot. It seems that I was on the money. Anything that usually holds the event in schools, colleges or leisure centres is toast; for the time being anyway, there is too much tied up in cleaning and more to the point, internal lateral flow testing. You aren't going to spend cash and time testing your staff and students twice a week and then let 1,000 unwashed anoraks in to touch all the surfaces. Much easier to say no. The really big events that use exhibition centres will come on stream in the Autumn in some form. What will happen is the small events will run as soon as the basic restrictions are lifted. There are those that I know that describe this type as 'piddly', not worth the effort, and I've always disagreed. Village halls and church halls; it's where the exhibition side of the hobby has its root.

This in particular fits the brief; a church hall and partly sanctioned (or blessed?) by the church. No fees to pay to a hiring committee and no staff or students to use the rooms immediately afterwards. I foresee these small events springing up all over by the end of the summer - events to break the pressure that has built up. Events that can cancel at a minute's notice if the government shuts the country down or can change the regulations on how they're run in a similar time scale. On the phone I asked about plan B's. The reply was sensible: 'We can quickly change to whatever the government guidelines are at the time.' We should be out of masks indoors by then, but if not, that could be a way to move forward. Similarly, enforced entry numbers. Not perfect and not what what we all want, but half a loaf is better than no loaf and half a chink is better than no floodlights. This is good news.