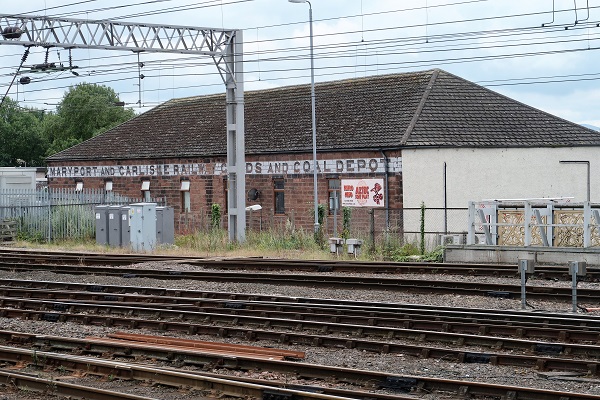 A few weeks back a small stop-off was made at Carlisle (more on that later). As one does I ambled down to the end of the platform away from the regular passenger types, camera in hand. Fans of ghost signs will appreciate the lettering, but it throws up questions. Currently a venue for small children, but is the sign original, has it been restored and why? Or has it just never gone away?
Posted by Chris Ford at 09:21 2 comments: 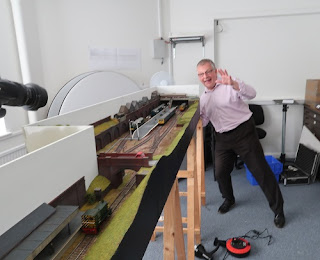 It's been a bit of a scramble and it's not really quite finished, but the Hopwood build saga is at an end, so off to Devon early this morning for some jollity at Peco. A full day of photographing including me being able to say that I'm the first person to strip off in the RM office (that we know of).
There's a bit to do yet before its return to them to get shipped to a well known Midlands exhibition in November. 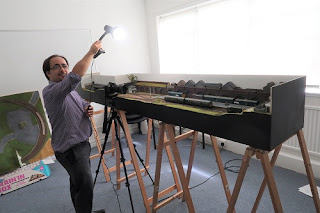 The big news for 009-ers in the last week or so is the announcement of two Festiniog items - or groups of items to be more accurate. The second wasn't a surprise to me as I'd caught a glimpse of the CAD in process under the hand of Peco designer David Malton. The above FR bug boxes (although purists will call them  'Birminghams'; bug boxes being a post preservation term) are now at the test print stage and should be out soon.

If that wasn't enough, the announcement last week of  a tie up between Peco and Kato on an England 0-4-0 RTR model to be followed by a Farlie did come as a surprise.
These two announcements show some joined up thinking and mean that it will be possible to build an FR layout straight off the shelf. Whether you think that this is a good thing or not is another question. No prices are available yet, but looking at past practice I think we could assume that the Birminghams will be around £25-30 apiece, the Englands around £150 and the Farlie £200+ so not a cheap game by any means. However that is the way that it is now leaning, and looking at the way the Baldwin has been received and how it has sold, I think they will be exceptionally popular. How many ACTUAL Festiniog layouts will spring from this is another question, as most will run in 'freelance' guises. Interesting times.
Posted by Chris Ford at 01:10 4 comments: 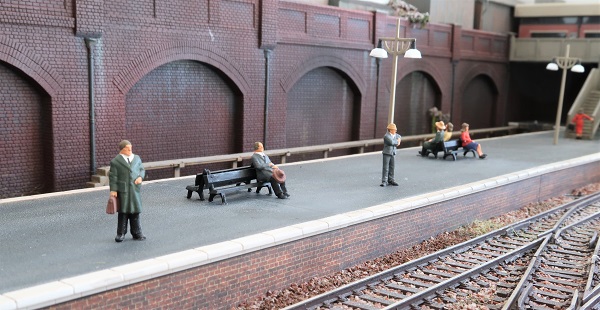 Planting a few details on the platform of Hopwood. Time was pressing, so a look at the new sets of 4mm passengers from Peco/Model Scene. All pre-painted which suited me fine and less work than my usual Airfix/Dapol method. The only modification was a light touch with a file to flatten off the soles of the feet - theirs not mine.  The whole layout is starting to take on the air of something built in the 1960s albeit with plastic sheet rather than brick paper.

Incidentally, the layout is pencilled in for a few shows already: DEMU showcase and Global Rail in the late spring and the WRG show a little earlier. Dates when I get them myself. Though it may sneak out before that; again details to follow.
Posted by Chris Ford at 01:07 No comments: 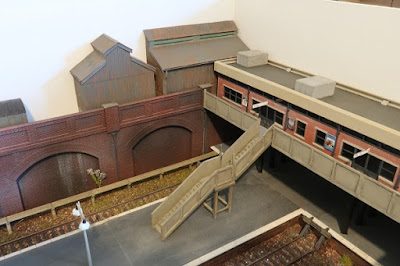 Down to the fiddly stuff on Hopwood, as much of a set of choices about what to put on and what to leave off. As usual I could carry on adding things, but that's not the brief. This scene has now had the gaps filled and the main things are now on it's down to populating it and signs.
Posted by Chris Ford at 00:58 No comments: 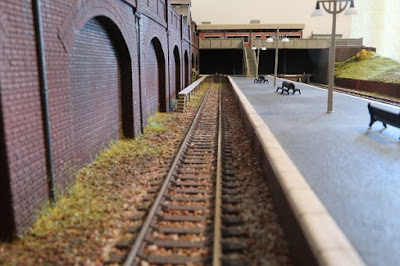 I've just about got down to the piddly stuff. I need figures and some running in boards. It's the final details that are taking the time.
The code 100 looks remarkably NG here.
Posted by Chris Ford at 00:18 No comments:

Firstly thanks to the handful of people who got in touch asking if I was OK as I hadn't put a post up for a couple of weeks. 1. I've been away and 2. there are outside family issues, not that I've not been busy on Hopwood or any other modelling.

Something I've been looking at recently is the video question. A while ago I ran a short vid on the workbench here and got a lot of negative comment vis-à-vis the 'rush to video'. I took that on board, but I'm starting to think that that may have been wrong. I'm not exactly going to become Zoella, but I do think it's worth examining further.
I returned to my youtube channel  here a couple of days back, which has been sitting there since 2012, and dug around in the analytics. Here's what I found:

1. I have 151 subscribers. So what, you maybe thinking. However, there are also a shed load of youtube vid's out there on 'how to get to your first 100 subscribers' - I didn't realise I had them, I was just throwing a few vid's of stuff I'd filmed at exhibitions purely for my own amusement.

3. More than 70% of them have signed up from one particular item, this one . Which is about wire-in-tube point control. Most of the other videos on the list are layouts at shows and a few preserved line items. In other words what most of us would point a camera at.

This leads me to conclude that even though the traffic isn't high compared to some, it is a point where people are interested, even without me pushing it or even digging below the initial layer of interface - I'd never really thought to bother. The audience is middle aged male (ahem) and the item which is most popular isn't choo choos running. but a constructional piece with me droning on (no one likes their own voice).

Someone who I trust implicitly recently described me as 'a communicator'. I laughed, but after all nearly 10k of you kindly turn up here every month when I'm posting regularly and I do get grabbed at exhibitions and am genuinely flattered when people say they read this. I shall give this some further thought.