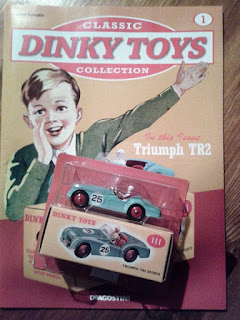 I don't normally do this sort of thing, but this caught my eye yesterday. Firmly aimed at 'gentlemen of a certain age' a partwork of repro Dinky cars from the 1950s onward. You get a car with box and a slim volume of info about the model and the prototype. The scale is stated as 1:43, though this should be taken with a pinch of salt. It looks closer to 1:50 to me.

This first is priced at £2.99, the second is £7.99, the third and onward £11.99. Or that is what it appears. What I can't find out is how many there are all together so I can't calculate a final figure. Even at eleven quid it doesn't seem too bad (how much are diecasts now?).
Probably one of the better of this sort of thing, but as it's not the original, the forward value is questionable.
Posted by Chris Ford at 11:36 No comments:

I hadn't seen this before. Obviously part staged, and if the traffic levels were this good, it wouldn't have closed.

A general sort through the 'bits of track' box turned up four PECO medium radius and a single slip in code 100. I noodled around for a while and turned this up -  a 3'6" - 4' micro shunting layout. This would almost clear the cupboard once I've worked out how to wire the slip. It didn't get a nod of approval from West Sussex - 'you won't be happy as it's code 100', but maybe clearing already bought things is good? Entry/exit could be form virtually any line as all end up on the loop, and it could be fed from a 'stick' fiddle yard or something more complex. A neutral industrial background would mean almost anything goes as far as stock is concerned. New Year quicky?
Posted by Chris Ford at 11:16 8 comments: 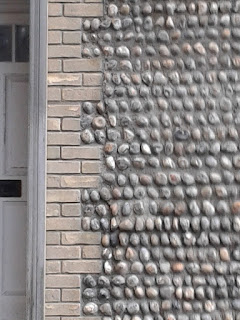 A query below had me trying to stand upright in a gale taking a photo of a wall. The query was about flint when I'd said pebbles. The above is not the same wall, which was unavailable, but one nearby. One assumes that this is a case of using local materials, in this case beach pebbles. There's not loads around the area, but there's enough in a few of the older back streets to make it a small local feature. 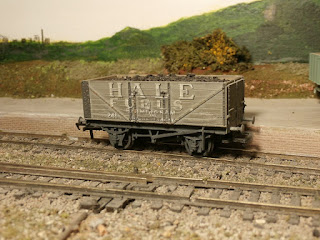 The AotC needed some 'period' models to run on it. Period being early 1980s in model terms. Here's one I did earlier in true Blue Peter fashion. It's an Aifix ( I think) body, probably out of a rummage box, mated with a Ratio chassis. The weathering is light. There is a trend to make things look decrepit these days. This is probably a bit of overkill in most cases as anything looking that rough would be taken off and repaired. This is just a bit grimy, though looking at this I note that the insides are a bit too clean.
The track is the obvious Peco code 100. This would have been almost the only choice at the time if you didn't want to built your own. The wire-in-tube control is just visible.
Posted by Chris Ford at 11:16 1 comment:

A couple of linked points drew together this week. The first was probably the recollection of something I've read recently online (Paul Marshall-Potter) about the distinction of players and builders. For a split second I was confused by the word 'players', but the break is this: There are those who like to build stuff and those who like to operate. I think I fall into the builder bracket. Michael Campbell (blog to your right) has jibed 'it's unusual to see you behind your layout at a show'. He's not wrong - I'm happy to chat and build, but less keen to operate the thing. This means I'm not a player. The exhibition is a reason to build, but is not the end game. That falls to  the process itself.
The second point is the bounce from my rather tongue-in-cheek comment about jumping on the AotC. which has generated an amount of reaction here and via email. I wasn't literally going to jump on it, but the challenge was to build it as close as possible to the 1978 plan and in the spirit of late 70s early 80s modelling. That is now done - end of challenge, bell rings, all change chairs. In a nutshell: now it's built, I'm bored and want to make something else. See there, it's happened again, builder, not player. I'm not alone here; there are some who regard their layout as the final act, but probably more who enjoy the process of making something just as worthwhile. I'd probably be better off building layouts for other people to take to shows, than layouts for me.
Right, all that said, I'm off to make a noise with Chesney Hawkes.
Posted by Chris Ford at 11:06 3 comments: 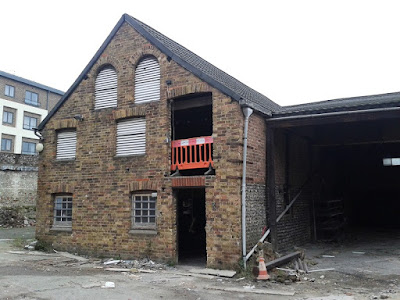 Yeah, I know, late again. I caught this a couple of days ago on my walk to the theatre. It's the back yard of a large hardware shop. This has closed and moved, and the whole lot is being demolished. So quick as a flash I'm in there with my phone. Another day or two and it'll be gone. Note the pebble walling.
Posted by Chris Ford at 16:48 1 comment:

The Art of the Compromise

A request below asks for the whole thing. Tricky in a midnight room light situation, but here it is.
The Art of the Compromise - less art more compromise. It may well go to the WRG show then get jumped on as my challenge is complete.

The original post here:http://unnycoombelala.blogspot.co.uk/2010/12/compromises.html
Posted by Chris Ford at 00:27 5 comments: 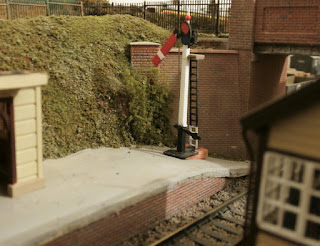 On the original AotC plan in the Modeller, there was a bit more open space to the right of the platform. This aped the set up at Fairford with the ganger's hut and a the starter. The reality is that there isn't enough space at all if you want a long enough platform, so it has to be tweaked. This throws up a problem in that the ganger's hut can go, but the starter can't.

I'd rammed the platform right up to the bridge. This is not an issue, but the prototype would have dropped the post through the platform surface. I could have done that, which would have meant destroying the signal ladder etc. I've gone for a bodge and rigged up an angled 'foot' out of scrap and brick sheet. It looks a little bit trainset now and is impossible to bed in with weeds in this position.

The second issue is do I make it work or not? It's possible, and there is a handy cross member to attach a crank to, but....

I think the biggest problem is that now I've done the deed and built the Roy Link plan, I want to move on to something a little more logical without the compromises. 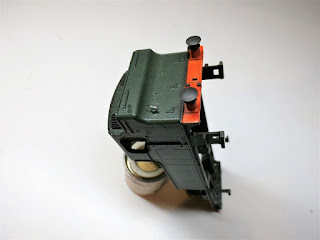 This is in some ways a quite old school bit of work - most of my stuff is. A lot of the newer components are wonderful, but I tend to fall back on old ways as they are safe, and more to the point, fairly cheap. They also require 'modelling' as opposed to just buying a bit. This is a case in point. There are I believe some very good etched parts for fire iron hooks, but I have a box of staples in the drawer and a little work with some fine pliers gets a passable shape. Four holes and some super glue and you're away. They're painted now and are barely noticeable. This is good - subtle shapes and shadows work well.
I got taken to task earlier on the phone about my glib mixed class reference. The problem is that before 1946 (i.e. most of their lives under GWR colours) these were 48xx and so most of the modellers usage should be under this numbering, but they were so much longer under 14XX that it seems a bit awkward referring to them as anything else.
Posted by Chris Ford at 00:24 1 comment: 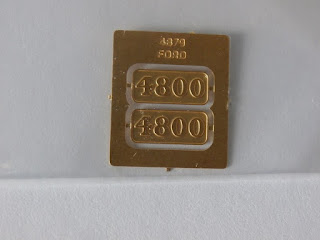 Number plates for the 14XX have arrived from Narrow Planet. Very tasty and a bespoke service all for just a couple of quid.
Posted by Chris Ford at 00:25 1 comment: 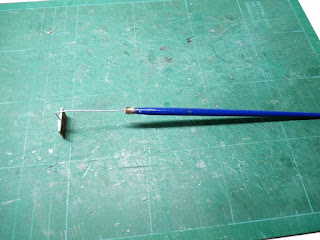 I tend to use a hand uncoupler for most things - yes 'hand of god' but a quick flick is preferable to yo-yo-ing back and forth over a magnet. Most of the layouts use a loop over a pin set up: Svanda uses single ended Euro-Bemo types and the 009s use Greenwich. For these a bent paper clip woks fine. For the AotC I've stuck with the smaller narrow Airfix/Bachmann tension locks. Here the paperclip doesn't work as well as you have to find the 1mm gap to lift the hook. Therefore a trial is being undertaken using a paddle uncoupler. Pence to make: old paintbrush handle, paperclip and three scraps of plastic sheet. The handle is drilled and the clip stuck in. The sheet has a small groove filed in and clip stuck in with UHU. This is followed up with thin sheet to trap it with more UHU and finally solvent. The paddle slides under the wagon and lifts the dropper not the hook. I may have to go down the magnet route later, but this is a cheap first attempt.
Posted by Chris Ford at 11:30 1 comment: