There are as yet only two locomotives on Unnycoombe. The 57xx Pannier was shown in an earlier post, the other is a Dapol Prairie both, baring in mind the period modelled in early 60s, are pretty grimy. The Prairie was still in it's pristine livery until yesterday when I attacked it with acrylics and some coal dust. 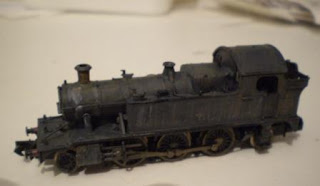 Both the locos, and in fact most things on Unnycoombe, are referenced with regard to colour from an Atlantic book: The Colour of Steam Vol 3 Great Western Branch and Main. (ISBN 0 906899 16 8) by P.B. Whitehouse. I've had this book since I was in my late teens so it's probably out of print by now. What it does show is that during the period 1961-5, unless on top-link passenger duties most stock was pretty sooty and uncared for. It was this feel that needed to be replicated for Unnycoombe and this Prairie was influenced by a plate of 4161 exiting a tunnel near Gloucester with a three coach train; a scene not dissimilar from the arse-end of Unnycoombe.
Again, I have to admit that wethering N Gauge stock is nowhere as simple as it would be in 4mm. 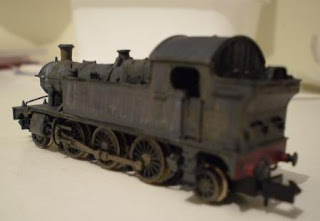 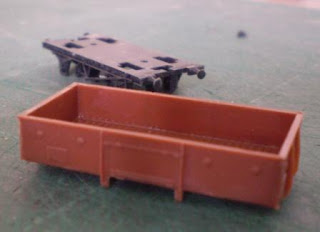 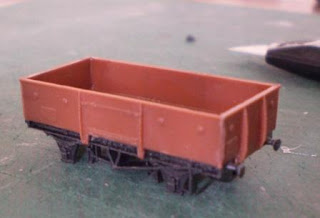 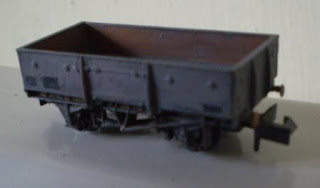 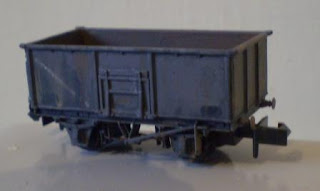 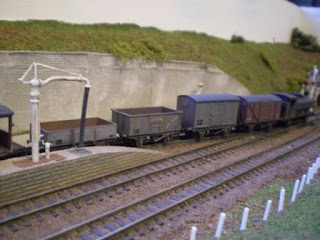 One Parkwood 2mm kit, one Peco 10' wagon chassis, one Peco 16 ton mineral wagon kit, strips of 40 thou square strip,one Saturday afternoon.
Nigel cutting and fitting fenceposts, yours truly wagon building.
There is no decent accurate RTR model of a standard 109/108 16 tonner, so a Peco kit was eventually found. The problem was the end door stripe, which i did free-hand in the end. The Parkwood kit for the 13 ton High-side steel open was found at the Astolat show and mated with the requisite Peco u/f kit.
Fence posts 88,89,90, 91, .... .... I just painted them. 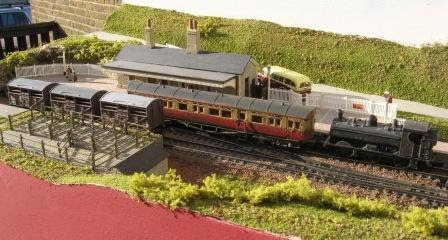 After much huffing and puffing I decided not to trek to the far West to Small and Delightful at Shepton. The cost is too much considering the list of layouts on offer, which I have either seen before, or would more than likely see closer to home. There was also the draw of some inspiring conversation over dinner, but the above reasons of cost outweighed in this instance. There is (as I was reminded by by two people including my wife) only a couple of weeks until the Arundel exhibition and there are still a few things that need doing to Unnycoombe before the 6th. Getting both Nigel and I and the layout in the same room together becomes more difficult these days, so opportunities need to be grabbed. Therefore today will be a day of cutting minute fenceposts and some stock weathering. Model railroading is fun... or so I keep telling myself.
Posted by Chris Ford at 11:41 No comments: 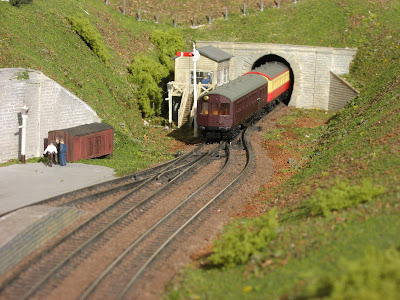 Unnycoombe will be appearing at the Arundel show on the 6th March 2010. Come and say hello.

As requested.
I dislike 'helicopter' shots and this has the added problem being washed out with flash. Still it shows the full extent of Garn; all 1 metre x 14" of it.
I had also mentally wrapped this particular blog page up, it being layout specific and having two others which deal with similar subjects (see side bar). I may combine at some point. These three plus Nigel's Norwegian page which I service while he is without internet connection. Garn- the layout-is effectively on the back-burner (apart from one outing later this year at Worthing)while work is done on other projects such as the joint 'Unnycoombe' and the virtual standard gauge 4mm project 'Rhiw'. Not there is much of anything happening at the moment. We all go through fallow periods where no modelling is done, and this is one of those.
Posted by Chris Ford at 12:44 No comments: