Yeah, I'm on a roll now.
Susan in her final grubby glory, less the yet to be painted driver. Three coats of Simon Green, and German Grey for the black bits. Followed up with a lot of dry brushed Red Leather and a wet wash of G**mes Workshop Charondon Granite; all acrylic. 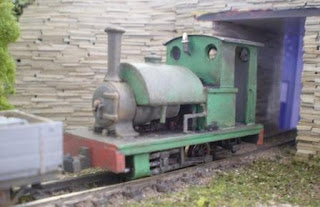 The front-of-cab bunker area was given a covering of coal dust, brought in and applied with a tea spoon. Carrying coal dust this way over freshly Hoovered carpets has an air of high-pressure school sports day. And later puzzles Mrs F. 'What's this black stuff in the cutlery drawer?'
*shrugs* 'I dunno , pepper?' Maybe I should have washed the spoon... 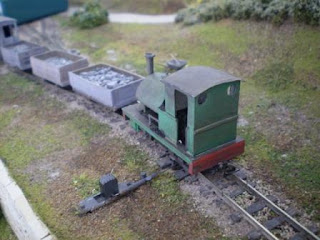 There maybe a break in proceedings for a while. 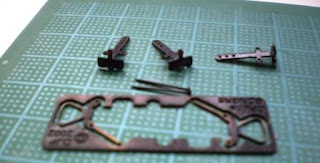 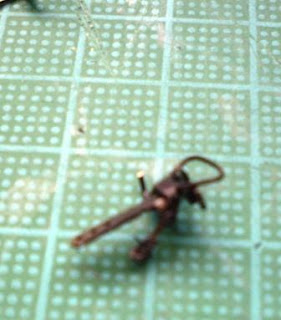 As always a friendly show, lots of chat with some great modellers and a particular flood of information from an ex South Wales area driver who gave (after a little prodding) chapter and verse on signalling, exchange siding working and general safety practices applicable to Rhiw All useful stuff. 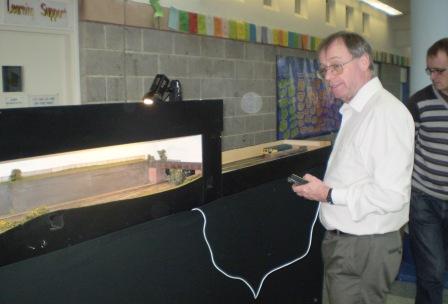 Nigel operated . I drank tea. Probably the most relaxing exhibition for a long while.
And now, some music...

To the Worthing MRC show this weekend and Rhiw's debut exhibition

I spent a large portion of yesterday setting up and running it and trying to iron out a couple of bugs. One of which was one of the MDVs falling off under the bridge (where else?) I think I've cured it by squeezing the point blade into the stock rail as it looked a fag paper further out than it should. But why does everything else with the same wheels and back to back run through OK?

If you're old enough you'll remember the Tri-ang wagon axles that protruded through the axlebox and had a wheel and long tube moulding that revolved on the axle. How everyone cheered when pinpointing became the norm. Well yesterday I stuck little bits of foam under the axles of alternate wagons to stop them bouncing around and make them act like real thirty tons of metal. The running now is... well Tri-ang-ish.

So if you are near the south coast over the weekend and fancy watching all the fun, do pop in and say I sent you. You could even tie it up with a visit to Gaugemaster who will be seving tea and cakes all day.
http://www.worthingmrc.co.uk/mrc/
Posted by Chris Ford at 08:58 No comments:

And in the interests of balance here are two shots of the sister loco Sea Lion at Groudle Glen in July 1993. The date I can be sure about as this marked the demise of wife 1. She's not dead, but this was the tip point. 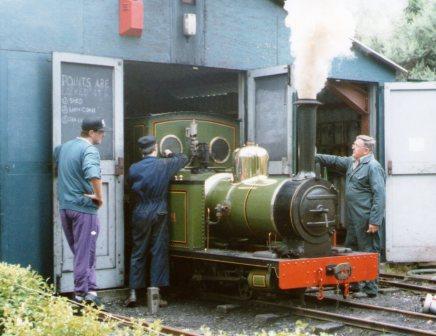 I like this shot even though the loco is partly obscured. the encroaching rock face, sleeper-built bufferstop and the tank make a pleasing combination. 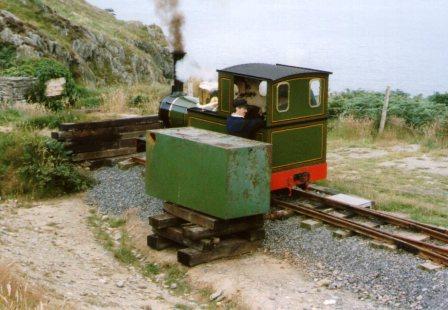 Trawling through the archive of prints turned up these out of a set of four or five. As this is a bit of a Bagnall season. This is the 240 Bagnall Polar Bear as seen, I think, after its basic restoration. Taken at Amberley Museum at least a decade ago. 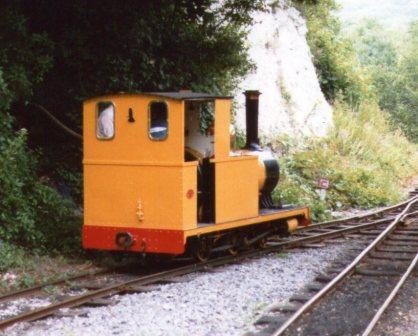 Looking at the photos it's interesting to see how much the site has changed. This shot of Martin Smith with key, out side of what (then)was one of the two small loco sheds. 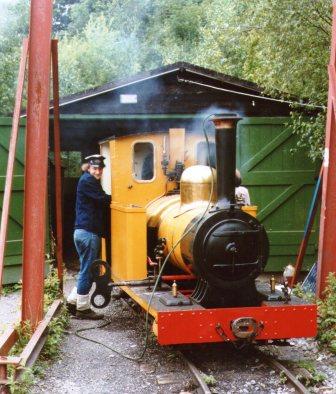 These are tiny locos and this is worth bearing in mind for anyone modelling the loco's home Groudle Glen's 2' line or the Rye and Camber's 3' as the locos were fairly similar in shape and size. 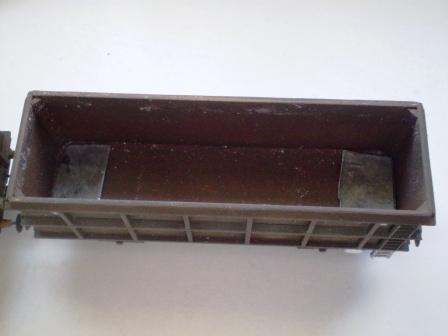 I had an argument with Mrs F. a few days ago about when the official end of summer was. She was entrenched into thinking it was the 31st August, I was sure that it was more the end of September. Yesterday I was sticking my tongue out at her with temperature still in shorts level, now with the rain pissing horizontally across my field of vision I not so sure. What does all this mean? Well it's the start of the modelling season; or what used to be the season. Deck chairs back in the shed and craft knives at the ready. Now, like football, it has no break. Possibly too many shows and not enough modelling . What I haven't done much of is sit outside in the sun. Reason being the pressure to get Rhiw done for this month.

Can it take over? Well with some people it does and you have to wonder if they can function on any other social level, I certainly don't want to just be a modeller/enthusiast, but it can be easy to let it take over now that the main thrust of the hobby is to go out and wave your bits at the public rather than quietly wave them in the privacy of your spare bedroom.

Those people who seem to be increasing looked down upon for generally going round in circles with the same layout over a period of decades in some cases. But is this not really the true way? I'll put money on the trade liking these modellers more rather than the exhibitors and if you scan the list of 'influential' layouts more than a large number are home-birds: Craig, Buckingham, Ashdon and Midport, Madder Valley, Berrow. Yes they were sometimes taken out, but they were mainly for the pleasure of the builder. Have we gone wrong in all building endless punch and judy stands where the presentation of the modelling to the public takes an equal if not greater thought than the modelling itself?

Although I like doing the odd show there is a danger that this angle takes over and you become nothing but an amateur busker. Except in certain circumstances exhibitions pay nothing but fuel and maybe accommodation so there is no money to be made. What I am realising is that while a few invites a year is good, more than four or five intrudes and I run the risk of becoming a little one dimensional. To that end I feel that a break would be a good thing; not a break from being a modeller, but to take a breather from building yet another exhibition piece before it becomes a treadmill. The 'five year plan' still exists, but it may have become ten.
Posted by Chris Ford at 12:28 1 comment:

I got passed this today. Now I'm not sure what I want to do with it. 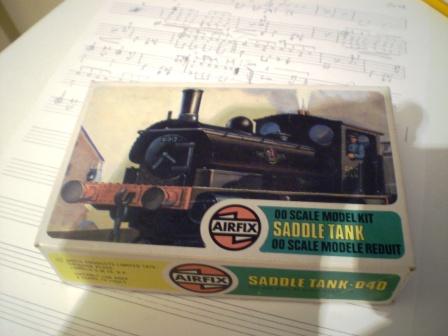 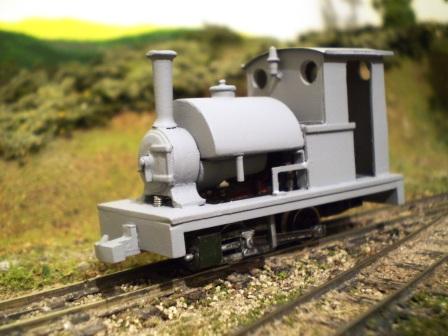 I had an issue with the front coupler. To use the usual Greenwich which has a long flat tail to mount it, I would have needed to cover the screw that holds the entire thing together. Yes I know people do this all the time... In the end I found a stepped whitemetal casting from a kit that could be superglued to the bufferbeam at the right height and leave the screw clear. I think all 2 inches of it looks quite cute and not as distorted in the flesh as the macro lens makes it look here. My thanks to CP and the husband of the real Susan for their barrage of critique over the last few days. So only to paint in dirty green and ready for ExpoNG. 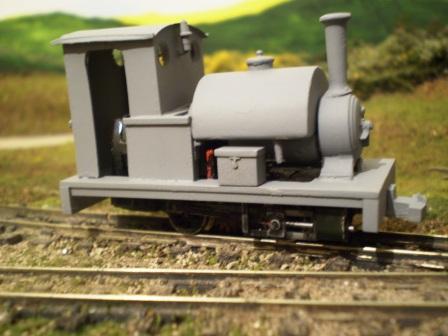 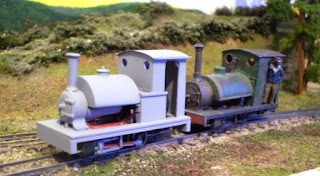 Miles and Susan perched almost coupled on the throat at Garn.
With chimney and brass roof superglued on and a whiff of Halfords Premium Primer blown over the loco and next door's roses, I found it hard to resist posing the pair together. Both from the same root of Ibertren chassis, Chivers front ends, and plastic rears and footplates. Just whistle and steps etc to go on before a final dirty paint job.

This has been a lot of fun, as has the parallel discussion on cab door heights via email, and cheap too. The original kit and chassis were bought for £9 and £12 respectively in 1991 and this would be their third layout. Plus a few pence worth of plastic and about five hours of fiddling. But it's a hobby ain't it?