Pinchingfield
Pinchingfield was a small 1:24 scale layout built in 2003/4 and featured in Railway Modeller in November 2004. It was designed to display the mainly card-built rolling stock of Les Coleman and 90% built  by yours truly. It was experimental in many ways both in the choice of scale (1/2 inch to the foot) and with regard to many of the materials used.

As usual simplicity was the name of the game with just four points on a 7'8" x 15" baseboard. These and the plain track sections utilised Peco 0-16.5 track parts half buried in ash and soil ballast. The whole of the track plan can be seen in the two photos below. The building in the top photo was made from an MDF shell covered with Das modelling clay which was sanded flat and scribed when dry. The transfer building in the second photo was corrugated cardboard over a wooden framework. Scenery is paper towels over card formers covered with dyed and bleached carpet underfelt. 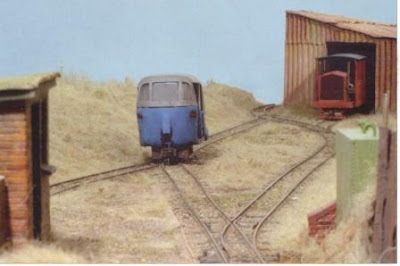 Pinchingfield was sold (less stock) in 2007 to a gentleman called Catweasel (really!) and was destroyed in a house fire in early 2011. Incidentally the name derives from the rhyming slang 'half inch - pinch'.

Les Coleman is still occassionally building in 1:24 1: 43 and 1:32 scales, and can be seen on the exhibition circuit. I however have resisted the boom in 1:24 and Gn15 that has happened in recent times. The sub-garden large scales are not for me. 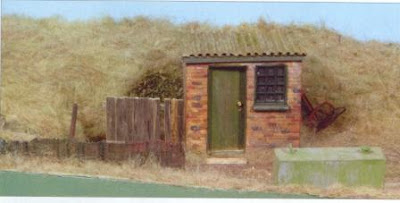