North Lane Works was pivotal in several ways: firstly it was the first article that I had published in a national magazine available in newsagents (as opposed to society journals) but more than that it was the first that was designed specifically with exhibitions in mind. Built initially for a bet - to prove that a simple O gauge layout could be built for under £200 and in a sub-8 feet length. It was an interesting project; one that I learnt a lot from, one that I would probably repeat, and would recommend for those dipping a toe into a new scale. It gained a lot of interest and there was a threat of it being used in the Gauge O Guild's 'Small Layouts' book Vol 2, which didn't happen. Being a two point 'inglenook' plan it fitted the SMT brief perfectly. I passed the layout on to a young club-member after it had been exhibited several times. 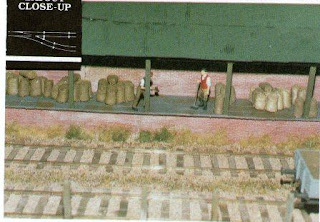 Einsford Mill﻿
My short foray into American HO. Built in 1995/6 it was built to see if I liked American modelling. At 9 feet long by 10 inches it was the perfect 'short line shelf switcher' or as Croydon club once printed in the exhibition programme, 'shout line'. It was exhibited several times in the South East but then ran out of steam and languished on the wall in my last home; which was it's downfall - I didn't have a spare wall 9 feet long so could only use the 7'6"scenic section. I used it as a photo-backdrop for quite a while, but in the end broke it up for parts - the points ending up on the Art of Compromise layout.

It was however the first of the 'standard boards'. i.e. the now standard length of 43/45" that I know will fit in just about any car and which I find a little easier to shift than something 4' long. Also the first of the 'My Fair Lady' punned names which adorned a few layouts of the time. It appeared in a few issues of Model Train International  - the main article from which these photos are scanned is in No 19.

Einsford Mill exhibited
The full 9 feet of Einsford Mill at the old (Thornhill) Southampton club show. This was the day that I left the rolling stock in the hallway. Luckily Simon Hargraves was on hand with 'some that I want to run'.  He saved the day.  Photo- David Barker

Both the above layouts were underpinned by what came to be known as  'the North Lane Works trestles'. Basically the Iain Rice 'Ulysses' design of trestles and stretchers. These supported all further layouts up to and including Wood End after which they were deemed to be far too bulky and I changed to the small table-top 'lifter' for Garn for a smaller series of layouts.