It has been mentioned of late that there are probably enough projects in the drawers to last a number of years without ever needing to spend a penny on anything but glue and solder. I suspect that this is not an uncommon scenario. Maybe we should all put the shops out of business and spend the next two years just building what we have already got and/or started. The problem there is that building for an unspecified layout project is not always the best way to get enthused. But do we really need a layout project at all? I grew up with Saturday afternoon Airfix kits - the learning curve in spending my childhood doing these is unmeasurable, but they had no end-game; they were just what they were, a stand alone project. 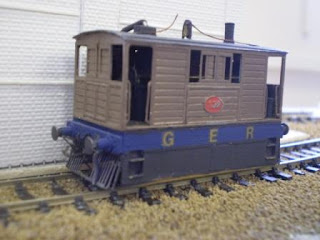 Case in point is this 3mm/14.2 gauge Y6 tram. I built this at least a decade ago and sold it to Steve Driscoll for use on his 3mm layout. It's a Finney & Smith kit - a wind-down from a 7mm kit and was a joy to build with lots of 10 thou overlays and fully detailed interior. I have a 4mm/EM version half done in the drawer. The transfers were the let down; the best I could get at the time were these from Maybex, and I see the bell-wire has suffered a little. It was though nice to bump into it again at the summer party. 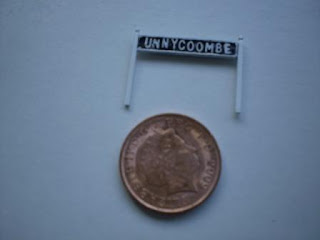 There has been a flurry of detail work carried out on Unnycoombe. I have just strained my eyes scratch-building this. Posts carved from 40 thou square and letters from Coopercraft or Slaters,
not sure which. Lining them up was a nightmare. they are very brittle and ping everywhere and as soon as a touch of solvent is added they float around. No swearing natch. It's a 1 penny piece not 2.