Anyone that knows me will be aware that I'm a bit of a sucker for pre-group signal boxes. 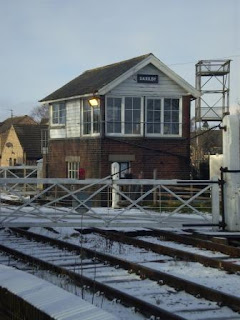 This example spotted over a bridge parapet on a trip to northern parts last weekend. And just prior to a pee in the hedge (it's the cold weather) I snapped this through the rather awkward girder bridge metalwork. As the sign states it's at Spilsby near Lincoln and according to my trusty gazetteer it's on the former GNR & GER Joint line between Lincoln and Gainsborough, though I'm not sure from which of those companies the design originates.
What I didn't realise was that most of that area is Great Central territory. Probably due to a diet of the Reverend Denny I tend to think of the GCR as a home counties company not a fish carrier.