Instead of doing what I should have been doing this afternoon I decided to sort out the railcar. Previously a push-fit, it had become a push-fall. Something needed to be done. I reverted to Tri-ang technology for a quick fix. The stern used the peg method. Bits of scrap plasticard were added at the sides to stop lateral movement, then a 'bridge' over the top for the GP18 footplate to tuck under. 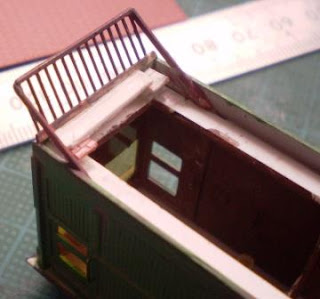 The bow end used a 12BA bolt. A hole (too large) was drilled through the GP's footplate and another drilled (too small) through the floor of the cab. I didn't feel like dismantling the cab which precluded using a captive nut so the bolt is just self-tapped through the floor. It won't be taken apart too much so shouldn't be too much bother. Note that it's off-set to avoid screwing it up the driver's arse. That'll get some interesting google search results.. 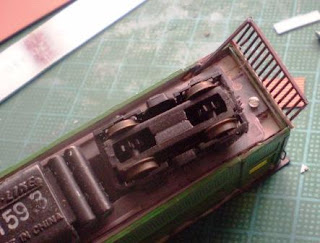