More about the Dyke. 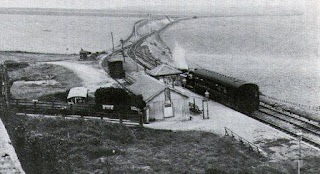 A few details of the Dyke Branch. As mentioned earlier, the line ran from Dyke Junction (initially West Hove and now Aldrington) and ran in a continuous S shaped curve climbing steeply to a terminus with a 300’ long platform just short of the summit near what is now Dyke Farm. This has now engulfed the site, but there are platform remains. The line was opened in 1887 and closed in 1938. There were two halts: the first Golf Club Halt situated just short of the terminus and Rowan Halt, which opened in 1934 to serve the new housing estate which had been built around the bottom of the line.


Although built before the Light Railway Act, the line’s appearance does, as Mr. Hargraves points out in his comment below, show characteristics of the Colonel Stephen’s lines. The halts have simple platforms with only a name board at the 1st and a wiggly tin shelter at the 2nd. The terminus building is pure Stephens and is very reminiscent of the Selsey Tramway and KESR structures. The main difference in character being the fully signalled layout using Saxby and Farmer equipment, and the 84lb chaired rail. The line saw most classes of locomotive up to 0-6-0 C2x size, its oddity was the 48’ long Sentinal steam railcar which worked the line from 1932-35 after which it was transferred to Westerham. 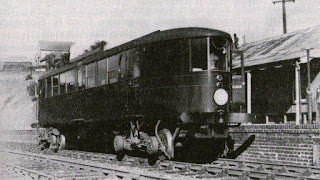 It is possible to trace the line on a map from Aldrington station where the following roads show the ‘S’ shape: Amherst Crescent, Rowan Avenue, Poplar Avenue, Honey Croft after which the line’s route crosses under the bypass and snakes toward Skeleton Hovel and up to Dyke Farm.

There then are the facts, but is it a modelling proposition? I think it has possibilities. Yes the operation is limited, but no less so than any other small terminus and that doesn’t stop people building them. There is one platform face and 2.5 sidings (the short one facing down the line is really only a ‘catch’ siding and can’t be any more than 100’ feet long). The track is quite substantial and I would have less qualms using PECO for this than I would a ‘light’ railway. If you were to stick to the prototype then using a mix of RTR and kits would work well. The obvious Terrier, although used, was a bit of a lightweight for the bogie stock on the gradient so a D1 and E4 are the best bet – the D1 from Southeast Finecast. Roxey Mouldings cover most of the likely coaching stock. The challenge would be the railcar.