I wanted to run a few odd bits of trunking around the trackwork coupling to relay boxes. There seems to be a habit of the trade bringing out just what I want at just the right time - it happened with the GWR water crane and cattle wagons for Unnycoombe. Those nice people at Ratio have done it again, now flogging trunking and boxes for 4mm. The trunking retails at £4.25 for 600mm. 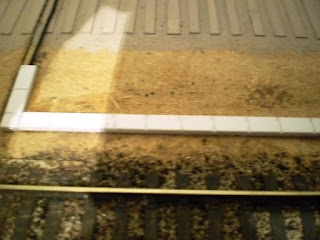 Now times are hard right now and as I'd need around 3'+, I'm looking at getting two packs - that's £8.50 which I don't have. What Ratio are selling is the lids which as far as I can see are panels around 1'x2'-ish. On the shelf here was a packet of Evergreen strip 80thou 188thou that I'd probably bought for solebars for something. Half an hour of marking up and applying razor-saw cuts gave me 3' worth of plastic which doesn't look too far from what Ratio are selling and a quid at the most.

Sharp-eyed will have notice that there is quite a bit of ballasting going on. The base of this is W&T Magnesium chips of which I am running very low. Is there a similar replacement out there?