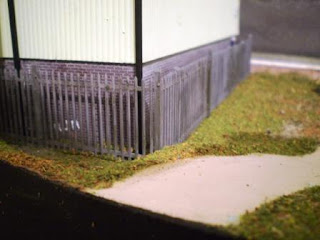 Sat listening to a mis-named CD. Credited as Wynton Marsalis, but should be Art Blakey's Jazz Messengers... Wynton sells more units than Blakey.

Yesterday I managed to plug on with the arse-end of Rhiw: the industrial unit finished off with some nice square section plastic drainpipes, a little subtle mid 80s graffiti, and an 8' security fence courtesy of Knightwing, which isn't just plain sections as I'd hoped, but a predetermined set of fence and gate combination, so a bit of surgery was called for. Followed by painting with surprisingly three colours: sea grey, metalic and some of that crappy olive green that I had so much bother with on the Spitfire project.

Today I need to attack the fencing atop the wall. Never before have I used so many commercial items on a layout.
Posted by Chris Ford at 10:20