This is rapidly turning into an epic text only topped by Ian Rice's 'Pragmatic Guide to Soldering' which ran for about 97 parts in MORIL. After lots of grinding and a little trimming you should have two blades: one straight, one bendy, which attach to the fishplates and locate into the cut-out in the stockrails as below. Firm but floppy -a bit like the second Mrs F. 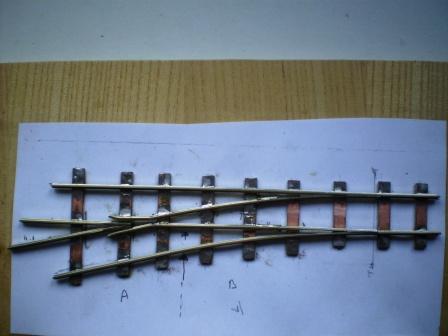 Now to tie-bar. Here I've used a length of 4mm copperclad, but you could shave down a bit of the 7mm stuff. referring to your PECO point slide under the rails and mark inside where the blades will go when switched one way or the other. Drill a small hole at these marks and one other beyond the outside of the sleeper line. This for your connection to the lever and switch. File a gap between the blade holes and to make sure -another under the stock rail. The squiggle on the left is waste. 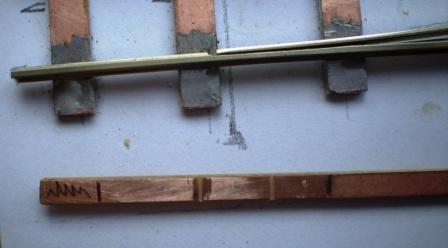 At the outside of the blade holes coat the tie with felt-tip pen to stop the solder wandering under the stock rails and sticking the whole lot solid. Tin the copper and drop a short length of brass wire into the holes, solder, and bend toward the nose about 2mm above the copper.

Remove the point from its paper backing and clean up. Lay the point over the tie and keeping it hard against the second sleeper solder the rail to the copper, squeeze the wire into the rail web and solder firm- the pic below shows this a little more clearly. The copper will hold the rail, but sometimes lifts. The wire running through the tiebar takes the strain. As can be seen I've smoothed of the copper from No2 sleeper to avoid shorting. The final part (Hooray!) will be checks and gaps. 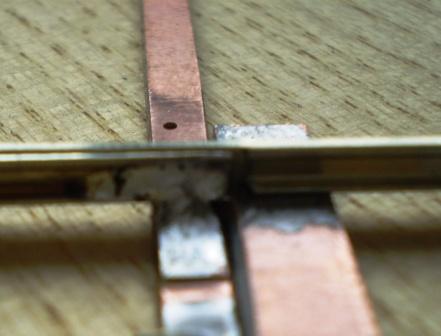