I think this may have been here before, but I couldn't find it. A Schoma diesel built in 1995 from card and plastic from a drawing in Narrow Lines and published as a build article a while later. 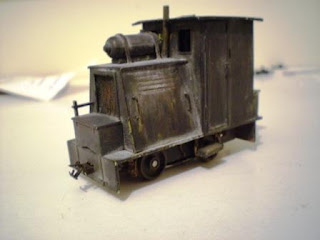 In true PDH fashion I need the chassis for something else, so as the Schoma hasn't been used for over a decade it is seen as a suitable donor. This then could be it's final portrait.

Craig Tiley monthly dropped onto the mat yesterday and with it my FREE kit for a Metcalfe signal box. I'm not great fan of Metcalfe kits - they don't have the feel of the old Biltezi and Superquicks and the method of folding the corners with a cut on the outside screams card kit at me.

However.
The accompanying article by young Craig... ... ... did get me thinking. I need an 'Eastern Region' box (is it Great Northern influenced?) like I need rickets, but would it be possible to take it one step further? Craig uses the Peco line bits, but stops short of detailing the inside and adding window woodwork... but then why not scratch build? A competition idea for Peco?
Posted by Chris Ford at 09:52