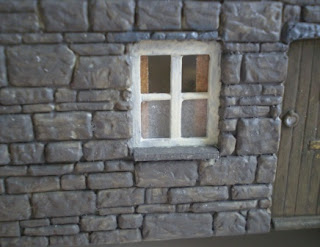 This is taking far longer than I envisaged. When it's all done I'll draw conclusions, but I think you know what they'll be.

Cills have been added using 2mm x40thou plasticard and touched in with Rowney acrylic. I had a conversation with CP a couple of days ago and aside from rainwater goods and cills, we touched on lintels (and the spelling of). I could even now grind away a bit of Wills and add something atop the openings. However this is a distance building in many ways and I'm concerned that it will look too heavy and eyebrow-ish. Lintels being generally flush don't stand out too much so I'm sticking to just a lick of paint to suggest. 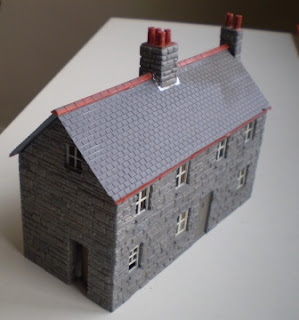 The whole so far with a wash of very pale grey to tone in and tone down and with the roof so far resting on the top. This should be home straight now with just a bit of flashing, bargeboards and down pipes. What will happen extra to that is a bit of dramatic Pendon-esque footing work to jack the whole thing up at one end before the porch (!) gets added.
All this for a couple of days in Porthmadog.
Posted by Chris Ford at 09:13