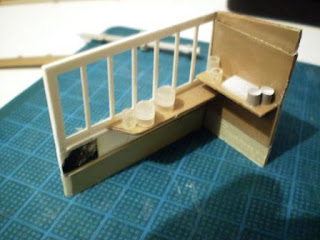 I had this idea about a porch on the end which masked the back door. I found a bit of what I think maybe a Wills lean-to; no idea why I have this or what I used the rest of it for. Anyway the remaining bits visible were knocked up out of scrap bits from the house and the end wall from the 'garden wall' mouldings that come with the kit. The shelving is of course sprue which as usual is more useful than most of the other parts. The end shelf being held up by a couple of small triangular brackets - sprue again.

I raided the 'tubes' box and found a couple of different size biro refills sliced accordingly and inaccurately; the larger filled with Bostick All Purpose which I've taken an instant dislike to. The box and paintpots - again, sprue.

All this done, being that it's a full moon while Mrs F was at her meeting.