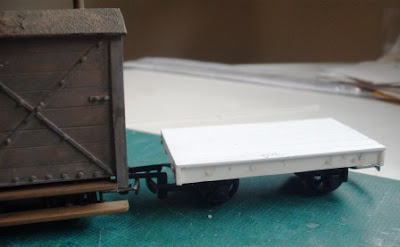 During the visit to the Bluebell over the weekend it was felt that I had to look round the 'toy and collectors fair' that was attached. I don't usually bother with them but I did pick up a Triang wagon for 75p. They're not particularly common, but I thought the rising 7mm ng layout would need one flat wagon. So after butchering the Triang to its minimum, a simple top was built with a 40thou scribed Evergreen floor and a BB/solebar assembly from 60thou sheet. Nominal bolt detail has been added, just a little strapping and paint to go. I took the dimensions from the Snailbeach coal wagon previously built as the same chassis is used, however after I'd got this far I thought that a flat would have transverse planks not longitudinal ones like the coal wagon... never mind.

There is a working title for this new layout Upper Dodsworth. There is a DODworth near Barnsley so not that far fetched. If you can think of something else... on a postcard please.