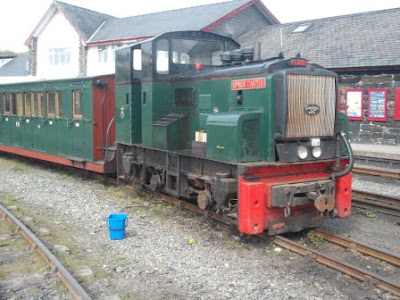 When I launched this page I envisaged putting quite a bit of prototype stuff on here. That happens less and less now, but here's a small i.c. for your perusal. Taken at Harbour Station in May, Planet Upnor Castle shunts empty stock. As far as I'm aware this was obtained from the Admiralty base at Chattenden and re-gauged from 2'6".

From TANLLAN:  Built by F.C. Hibberd & Co Ltd and delivered to the Admiralty in 1954.
Purchased by the Welshpool & Llanfair Light Railway in 1962. Sold to the Festiniog Railway in 1968 to help finance the purchase of Drewry 0-6-0 Chattenden.
Posted by Chris Ford at 10:10