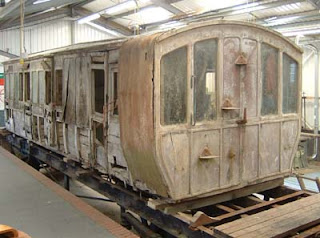 The slight break in proceedings is the result of two things; 1, the start of this years study, and 2, the fact that the Stroudley coach kit ground to a halt because of questions; namely lamps. The instruction drawing shows two oil lamps, the period photo I have on the cover of Stroudley Locomotives has three, and just to confuse further the photo of the built kit on Roxey's site shows four, but there are only three in the kit.

I emailed Dave Hammersley at Roxey.

'No one has noticed the discrepancy before' he replied, and went on to detail the possible choices I had before me. One lamp over the guard's comp' regardless, early: no split windows (aghhh!) no partitions, two lamps. Later: split windows, two lamps. Later still: partitions and three lamps. This is before the gas came in so there are far more after that. My photo seems to show the middle version with split quarter light and two lamps over the single large compartment so that's what I think I'll go with. But note these are over the point where the partitions would appear, not over the doors as per the drawing.

The deeper you dig, the more there is to find.
Posted by Chris Ford at 10:40