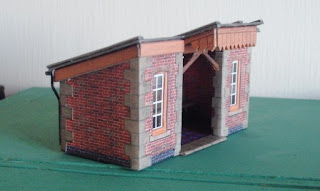 All done - well maybe.
This is the post pencil brickwork. The roof was smeared in graphite as well, in fact that's the point where I picked the pencil up in the first place for colouring in the edges. I ignored the instructions again and added the fascia boards after the roof was on - seemed sensible - and nicked V's in the canopy... and this is the weak point. The construction method suffers from the same problem as the walls and I may re-do, though it's not half as noticeable in the flesh as it is here. Set within a layout it would actually look pretty good. Finally a gutter was added from a bit of re-shaped sprue and a down pipe from microrod.

Conclusions: With a a few pence and some thought it's improvable. I am a fan of card as I've said before here and the kit is very well designed: everything fits and the printing though a little garish is clean... it's just the bloody corner folds that let it down. I note from the ad' in RM that some of the range have stone quoins printed on... with the gap. Why these can't be added as overlays is odd, perhaps they are. (BTW there are a set of 4mm railway posters included to add)

As this kit was given away with every RM there must be thousands out there... someone you know has one. Build time was about three hours and most of that was trimming the quoins. Cost: almost nothing.