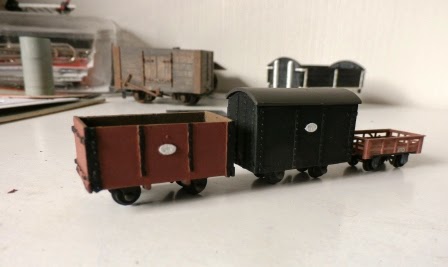 I was handed a pile of stuff from the estate of Laurie Maunder, mostly 009. It included these two GEM w/m wagons already built. The problem I had was that they seemed to be reversed colours - the open was black and the van weathered red. The colour photos I've seen of these seem to suggest the opposite. So while I left the construction as it was a repaint was need to settle my mind.
Weathering and couplings to go on ready for the Salisbury show next week and SWING the week after.
Tal-coed is taking on a definite FR bias.
Posted by Chris Ford at 17:01