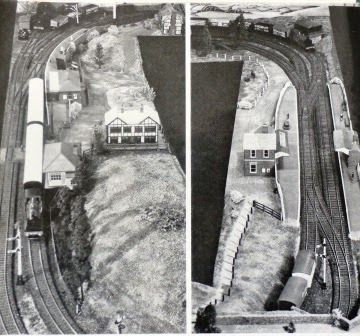 I make no apologies for the fact that this is not much more than a train set; that's the whole point. I found Simply for Pleasure in a batch of second-hand RMs, the  June 74 to be precise, but we were already old friends. That date is critical for I would have been exactly 10 years old. A little while later the layout ended up at Pecorama where I saw it probably that or the following summer. Out of all the exhibits there, this was the one that caught me. Looking back with the experience I can understand why: it was the train-set I had, but more so - a train-set on acid. It took what I had and made it real and showed me that the stuff I had could be adapted and altered to fit different surroundings. That of course is the whole thrust of Pecorama, and it must work, because I'm still doing it. 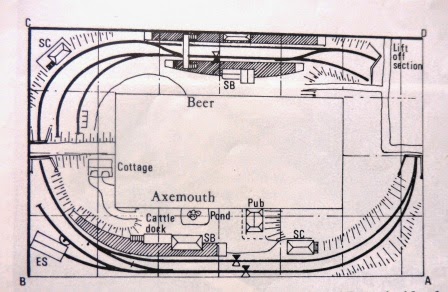 Technically it's a touch unwieldy, at 6'6" long split lengthways it's almost two single beds and moveable rather than portable. There are no fiddle yards - something else which I always lean toward - just the track break with the tunnel.
SFP has now gone, but as far as I know it's been replaced by something similar. People often go on and on about the lack of youngsters entering the hobby (which is bollocks). Maybe we should take a step back and build a few more of these.
Posted by Chris Ford at 12:14