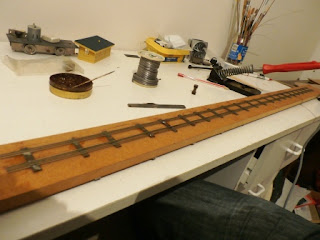 While the soldering iron was out and about, time for a little repair work. I put together this multi-gauge test track a few years back. It started with a length of EM which I was dabbling with at the time (probably early 90s). The strip of MDF was nabbed from the stage door of the Brighton Centre. I can't remember why I was there, but it may have been the Labour Conference, where my (not theirs) glorious leader insisted we play The Queen at the end of the job rather than The Red Flag... we got verbally lynched. Probably the same reaction as you would get playing The Flag at a Tory conference.
But I digress.
The EM went down on some 7mm sleepering. Then later on I was trialling some 14mm gauge NG, so that went down in the middle. Almost by mistake I ended up with 16mm gauge between two rails and on the outside edges 21mm gauge. Only the EM is truly accurate, but OO stuff will trundle along quite happily, as will 14mm NG and 3mm 14.2. As it's just straight track and no crossings the wheel widths cope. I even knocked up an 0-4-0 21mm gauge spud from a Wrighlines block, half a set of Terrier rods and some Sharman wheels to test the outer rails.
After 20 odd years of being thrown about it was looking a little sad, so I set to work re-sticking sleepers, and re-soldering loose bits of track on both sides, for somewhere along the way I'd added some 32mm on the reverse. For someone who jumps around gauges, it's a very useful bit of kit. 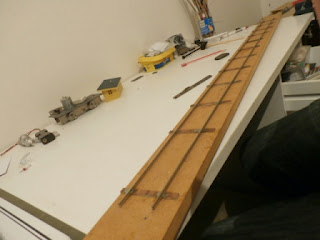