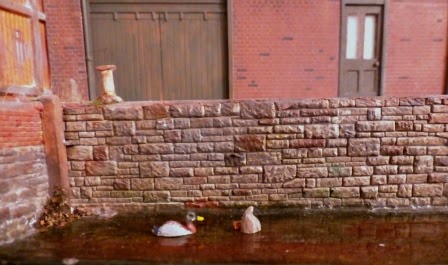 Firing on lots of fronts. On one hand there is the steady finishing of Morton Stanley. It's at a point where it could go out, but there is odd bits of detailing to do: I'm not happy with the station area yet, the building needs diddling with and there needs to be a little signage, benches, etc. The LH end is basically done, mainly though Nigel's sterling work with the warehouse. I'd been looking for a duck or two, just to accentuate that the shiny bit at the front was actually still water. I found a pack of suitable pieces on Duncan Models stand and although there are way too many they seemed like a bargain, and in some useful poses; all except the standing one with it's wings outstretched which would not look out of place over the door of a 1938 German government building. I've often pointed out that this game takes you to unexpected places and these had me reaching for the top shelf and British Birds you missed with your air rifle to get the colour right. The floaty one, a male mallard, took ages, the female with her arse in the air (settle down 5C...) was a bit quicker. I'm not 100% sure about this one as it looks as though someone has dropped a frozen chicken. Still it's stuck now.

I was having a bit of a downer about exhibitions, but the weekend at Southampton went very well. So much can depend on whether you are left alone to get on with it and not overly managed (just point me toward the stand space and I'll do the rest please) and whether the day long trek to the cup of tea place is friendly and flexible. This scored well on both counts. Kudos to David Barker and his team for getting it right.

Which takes me to moving forward: so far Morton Stanley is working well - better than I'd expected. I'd struggled with 7mm NG in the past, but this has a certain charm. Whether that will extend to standing behind it at an exhibition is another thing. It's first trip out is to the Sussex Downs Group's member's day in March; five o'clock on that day will be a better time to assess things. In addition to that I walked away from the weekend not wanting to bin all the 009 and burn the layout. This is unusual. Forward thinking and various discussions revived my liking of the '5 year plan' (not that it's five years any more). This would mean that the GWR 'Art of the Compromise' plan (being item four on the list) could be the next one out of the traps...
Posted by Chris Ford at 11:03