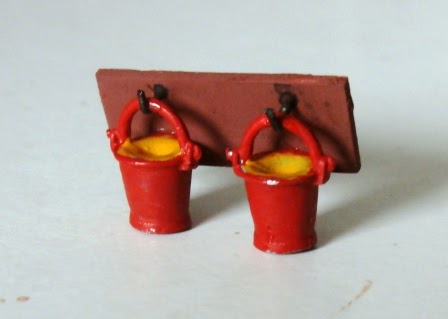 Slow blogging at the moment. This doesn't mean that I'm doing nothing, just that most of it is just tidy-up bits and finishing off repeated items. Do you really want to see another grey 7mm open wagon?
After a rather torturous route to me the fire buckets arrived. They really are rather nice although I've completely forgotten who they were made by, only that they were spotted by me, mentioned in Nigel's Gay Joe Gazette, I suggested them for Morton Stanley, he told his Scandiwegian mate who was going to Warley, but he lives in Basingstoke I think, so they met at the SRS AGM in somewhere or another, and I picked them up from Crawley. But they were only £3.20 for 12. Painted by self with a back board from a bit of scrap Ratio 2mm sheet and a couple of staples. A google search shows that (since I could not find one single period photo of  buckets mounted on a station wall) the board should be bright red as well, but I thought that would be overkill and the buckets would not show up so a bit of 70 was used instead.
The lack of photos suggests that the fire buckets on platforms maybe one of those repeated un-prototypical modeller things that didn't really exist that much, a bit like coal staithes at branch termini, but is repeated ad-nausium by modellers copying other modellers and pretty preserved stations.
BTW welcome to the small spurt of Ukrainian readers... or reader.