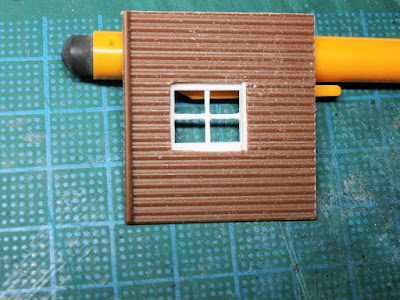 The Wills pagoda is a bit of a curate's egg. A shade too deep, but a scale 5' too short for the standard 'A shelter'. The doorway is also a mil under width. Sticking windows in the front therefore is awkward as it underlines the length issue. You could bash two kits together. I elected not to.
Some of the pagodas had side windows added either initially or later in their lives. In fact there are a surprising number of variants up to triple length sheds. The windows are fairly simple: a Wills small window unit has had its bars thinned and a hole has been hacked out to fit it. A small strip of 20x40 adds a shallow cill.
Posted by Chris Ford at 11:28