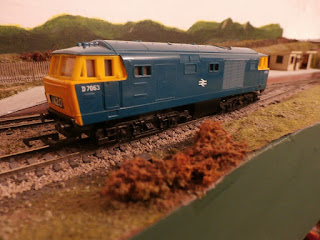 Note for younger readers, at least anyone under 30. This is an engine. Not your weedy, DCC, sound, detailed Bachmann crap, but an ENGINE. I got some of the old Rhiw stock out and this was second in the pile. Still in its box with Triang-Hornby branding. I make that the thick end of 50 years old. Plopped it on the track BRRRRRRRRR......... Flick switch, BRRRRRR....... Who needs sound chips -next door were hammering on the wall thinking I was drilling.
It doesn't say 'made in china' on the bottom, but 'Built (built!!!) in Britain'. This was something that you could thrash round for hours even after your Dad had stepped on it.

There were a couple of spare locos for Rhiw, this being one. But when it came out the grins appeared. It's basically dimensionally correct, but lacking any obvious finesse, and is everything MRJ railed against - however, have we taken a wrong turn? Cos this has presence like no Heljan Hymek ever could.
Posted by Chris Ford at 21:36