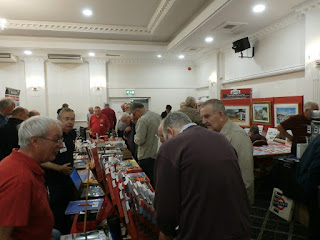 I had my doubts during set-up, but by the late afternoon de-rig it was fairly clear; the push for the hobby at the  moment is a) British diesels and b) continental. My slightly negative comments of late re: exhibitions were reversed - the ERA show was uncomfortably full at times and there was money being spent in large amounts from what I could see. This wouldn't normally be my sort of thing, but officially 'assisting' on Svanda meant I had time to compare and contrast. The general shows and the finescale are on a downward shift and the events like this are on the rise.

What was most evident was the chat and enthusiasm through out the day. I'd often thought that the continental modellers were a bit of a tribal bunch -it appears not. The team reported a better than expected day and we were well provided for. Halal chicken tikka sandwiches were a new item on the exhibitors lunch menu, but were eagerly snaffled up by self. 10/10

This was technically Svanda's last show; not that it is being retired, but simply that there is nothing else in the book. Time to consolidate.
Posted by Chris Ford at 09:41