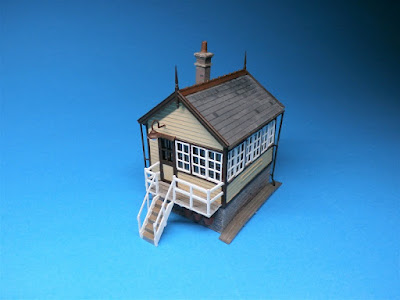 Well it's done. Sort of. Not being able to run with anything as designed, there are obvious changes and a glaring problem that looks worse here than in real life.
The kit comes with stone steps - I thought his was a bit visually boring so diddled around with the 'extra' bits that come on the sprue. These are there as they are common with the kit for the larger box. With a bit of cutting and some 20 thou strip it's possible to knock up a narrow balcony, though this would benefit from a support or two.
The kit as bought goes together well if a bit fiddly. The fail is the guttering and down pipes. The gutter pieces are shorter than the roof by about 3mm. There must be a reason for this, but I can't quite work it out. Worse are the down pipes - beautifully made and designed to stand out from the building. The problem is that it's not enough. Any real pipe in this situation  would have a swan neck to bring the pipe into the building. When I summon up the bother I'll replace with some 1mm rod suitably curved and less jarring. The foot board is loose and would need adjusting in situ.
Posted by Chris Ford at 11:53