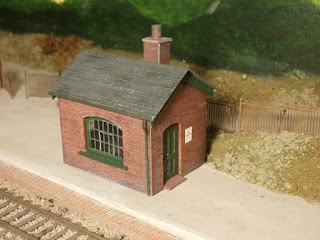 Finished off the weighbridge hut. Modifications as described earlier for the walls. The slates looked a bit like concrete paving slabs, so I fished out some old Prototype Models slate paper and covered the roof with strips of this cutting each division with nail scissors, followed up with a wash of paint and some talc. The roof looks too wide in photos, but doesn't seem to notice in real life. I'd probably chop the roof width down by a scale foot if I did it again. Gutters from 60 thou square strip and pipes from 1mm rod, chimney pot from the tubes box.
Craig's piece in RM states it would take you an hour to put it together. With all the extra work involved this came to about four - most of it being the roofing. Question is does it improve the basic kit? Well it doesn't scream pink bricks Metcalfe anymore, just adding those few textures makes all the difference as does the copious amount of graphite. I still wouldn't lash out for a full price kit as it wouldn't have been any slower to scratch build it using card and brickpaper for pence. All quite enjoyable though and I suppose that's the point after all I've still got the last freebie in the drawer which is a low-relief shop. I have a mind to turn it into a narrow warehouse.
Posted by Chris Ford at 00:09