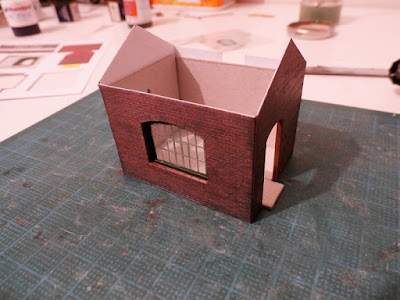 Rapid posting this week caused by a few tidy up jobs.

Almost to get it off the bench I picked up the freebie card kit that came with RM this month. The usual one-off Metcalfe kit of a weighbridge hut. Not in the range as far as I know, but more a taster to get you to buy them. Regulars will know my thoughts on this range so no need to repeat. Young Craig (pause for effect) has run a blow-by-blow in RM which gets the basic kit built. However, regulars will also know that I won't (or can't) do that.

The first modification was to shade all the brickwork with an HB pencil to tone the 'orible pink bricks down a bit. The second mod was to try the old technique of scribing the glazing and rubbing paint in to get the window bars. I could have knocked up some plastic strip types, but it didn't seem worth the effort. This worked up to a point. I basically scribed away the white printing, rubbed a dollop of green paint in with my finger, counted to ten and then wiped it off with a tissue. It looks better with the interior painted black and isn't so stark and unlikely as the white. All the card frames were painted with a cheap green from The Works. Thirdly, the lower door panels were chopped out and a piece of card stuck to the back and the whole lot painted. The PECO pin gives a door handle.
Posted by Chris Ford at 01:09