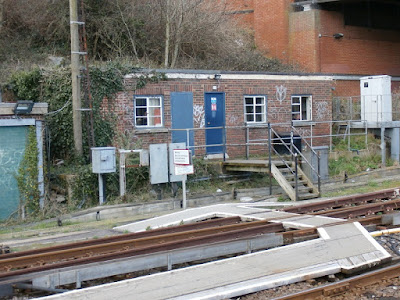 I'm a bit of an enthusiast for utility buildings - those brick block houses that often house water/electric/sewage equipment, but are also fairly numerous on the rail system. Devoid of any character and usually faced with unadorned brick, they disappear into the background and yet a just as much of the surrounding scenery as any of the Victorian architecture.
The above is a mess room at Hastings. It looks as though it was originally split into two rooms. Plain doors, Crittal casement windows and simple flat felt roof. Delightful. Something similar is probably available in one of the ready-to-plant ranges in 4mm, but how easy would this be to scratchbuild? Slaters sheet over a card base might be best to get the slab feel better than Wills sheets. The fiddly bit would be the handrails  for the steps over the trunking. Note the store with the up and over garage door on the left.
I'm sure Stig knows when it was built, but I'll plump for late 1960s.
Posted by Chris Ford at 11:52