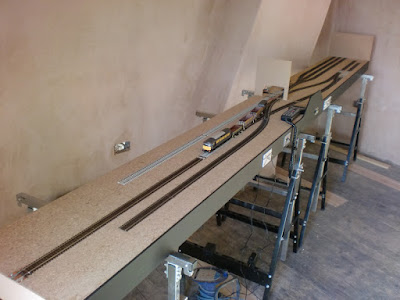 Like most modellers there's always one or two further plans being discussed. One that keeps coming back is Rhiw 2. Version 1 worked OK, did a handful of shows, and appeared in RM. However I personally had issues with it and it was broken up - the boards finding a use under the AotC. All the stock is still sitting here and it seems a shame not to use it.
Rhiw 1 here
One, or really the, reason for the collapse was my realisation that front operation was not for me. I don't like barriers (they get in the way) and I find the acute single view awkward for uncoupling etc.  Round the back I can wander around unhindered to get the best angle and I can dump point controls anywhere as I have full linear access. I also have a theory that front operators hold a desire for themselves to be the exhibit - the model is just a vehicle for their public ego. I've had my fill of all that crap in work; the layout is a nice barrier.

Two influential ideas for Rhiw 2 keep coming back; both South London in feel. Elm Park is one and more recently the above Croydon North Street (I can hear the gnashing of teeth from the at least two readers that I know of from Croydon who bite every time you say it's in London). There are differences: Elm Park has the platforms mostly hidden a la Rice's 'Bitsa Stations' ideas. CNS is full view, with a double exit vibe - closer to Rhiw 1. What I do like is the diamond crossing to get this.
What neither have is 'Wales' or the lifted track that was such a commented upon feature of Rhiw, and both use a far bigger space than I would prefer. Experiments may commence soon, I just need to get rid of a few layouts to create some space in here.
Posted by Chris Ford at 14:10