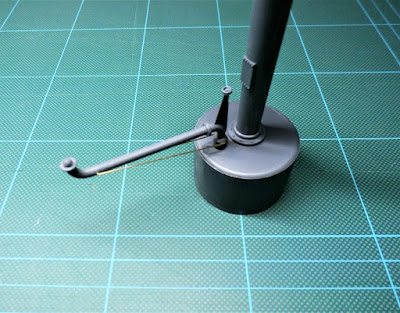 A lot of these are turning into mini reviews. Ah well.

I was told that this kit was a bit of a bitch. It doesn't fall together, but I've encountered no major problems thus far. Getting all the parts square with each other is the worst bit when you are working from the start point of a tapered post.

I elected to work backwards with the exit pipe and mount the pivot shelf last, thus avoiding the situation of having the pipe bracket dangling if the resulting gap is too wide. I also adopted the 'Tiley method' of wrapping the brace wires around the boss rather than fitting them separately.
The tank it self has been reduced in height. There are marks inside to help do this, but it would have meant making two cuts, which I thought was pushing my luck slightly. Instead I worked from the central join line on the outside, cutting on the waste side and filing back.
So far so good except I need to re-do the photo.
Posted by Chris Ford at 08:51