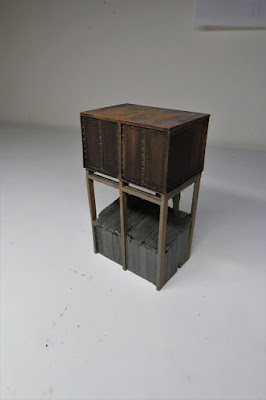 There are two parallel projects running at the moment: the new Welsh NG book and Dury's Gap which I'm trying to get ready for the Steyning bash (more on which later). The later needs four buildings, which are always the time thieves; two are done, though one of these may get a new door at some point. The last is the view-block item to cover the hole-in-the sky. I kept coming back to the idea of a water tower, but being a rather minor freight only line it wouldn't be substantial, so really precluded any solid brick edifice which means you can look through it therefore blocking nothing. A halfway house was found on the Selsey line a small tank on timber legs with what appears to be a small store at the foot - not quite big enough to warrant being called a hut, more a tools and buckets shed. I could also cheat with the tank and leave most of the business bits of the water feed apparatus off as it's only a couple of inches from the backscene; no point putting in what you can't see.

The construction is Wills vari-girder bits for the tank, some 60 x 125 thou strip for the frame and legs and various bits of 60 thou sheet for the store - heavily distressed to look like redundant sleepers that have been attacked with wet rot.
Posted by Chris Ford at 10:59